The Princess of Bern

The Princess of Bern 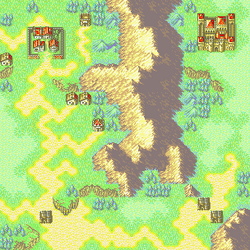 Chapter script
[view]
“Tucked away in the mountains bordering Bern and Pherae was a small village. This was where Roy was to meet the mercenaries that Eliwood had hired for him. Just to the east of the village on the other side of the mountain stood a small castle keeping watch of the border. When Roy arrived at the village, the castle was in a chaotic state. Little did he know that the turbulence in the castle was going to ripple out to reach the far corners of Elibe...”
—Opening Narration

The Princess of Bern (ベルンの王女 Berun no ōjo) is Chapter 2 of Fire Emblem: The Binding Blade.

The chapter begins with Roy heading to an area near the Bern border to meet a group of mercenaries that had been contacted by Roy's father Eliwood. Roy eventually reaches the area and the group stops to wait for the mercenaries to show up.

As Roy and company are waiting, Elen, a retainer of Guinevere, princess of Bern, rushes towards them with Bern soldiers in hot pursuit. Ellen runs into Roy, who then asks what is going on. Elen explains that a group of traitorous Bern soldiers were holding the Bern Princess with the intention of selling her to a country Bern was warring with to use as leverage over Bern.

As Merlinus and Roy argue about whether to save the princess or not, the decision is taken out of their hands when a Bern soldier spots them.

See: The Princess of Bern/Script

Roy's forces are deployed on the west (left) side of the map. The middle and top of the map is covered with a giant mountain range, part of the range which defines the Lycia - Bern border. These mountains are impassable by all but one unit (Shanna) and define the way the battle will be played out. The mountains run down the middle of the map, leaving only a small pass at the bottom for the player's units to fight through.

This battle is pre-deployed due to the lack of characters the player will have.

Like in the first chapter, it is suggested that the player not use Marcus to fight, if possible, as he is pre-promoted and will gain little experience for attacking or killing a unit.

Using Elen, who joins in this chapter, to heal the front-line units between battles is essential.

After two turns, Dieck and his mercenary group will arrive from the south in the middle of the pass. They will automatically become blue player controlled units and can be used right from the get-go, greatly bolstering the fighting force the player controls.

With Dieck and his forces up in arms as well, the player can easily force their way through the enemy forces and make their way to the boss. The boss can be somewhat difficult, but he can easily be defeated by using the Armorslayer acquired in the village from the level.