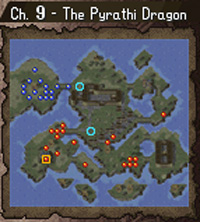 Chapter script
[view]
“Grust had caught the League unawares, forcing them to flee to Pyrathi. But the kingdom of Pyrathi seldom made contact with the outside world, and their king, Mannu, was wroth when he heard of the League's unexpected visit. There were whispers Mannu was a dragonkin - rumors soon to be proved true.”
—Opening Narration

The Pyrathi Dragon (A Wyrm-King's Wrath in the Europe version) is Chapter 9 of the game Fire Emblem: Shadow Dragon. This chapter was cut from Book 1 of Fire Emblem: Mystery of the Emblem. The first manakete is fought in this chapter.

This chapter can be daunting if you mess up, or do not cover enough ground in time. Yet, it can be a really good spot to train with all of these reinforcements. In Shadow Dragon, if you are using a Fighter, it is recommended to reclass them to Pirate so they can cross the water on the map. Also, it is recommended to bring some well-trained sword fighters with you, and an aerial unit (i.e. a Pegasus Knight/Dracoknight).

Although Marth has the Fire Emblem, it would be wisest for him to head to the eastern village. Also, position an aerial unit in a front spot during preparations so he/she can block the entrance to the village so the thief nearby cannot burn it down. When you enter the village, you recruit Jeorge, a pre-promote sniper. Even if you do not plan to use him, you get two free bows from recruiting him, so it might not be a bad idea to recruit him anyways. After the thief is dead, the aerial unit should head south to attack the southeast thief before it loots the small treasure vault. Also, Marth and Jeorge should take the path southwest to the southern part of the map. However, be careful, as a group of enemies await Marth's arrival south. Lure them into the narrow passageway where Marth can cut them down one-by-one, and Jeorge shoot them down.

Moving back to the starting spot, Pirates are preferable frontline characters to hold off the small force of Pirates that will come at you from the south, though a Mercenary or Myrmidon can fill the spot just as well, trading the ability to cross water for a weapon advantage. It is also a good idea to leave an archer behind, as well. Be sure this small group has a Vulnerary or two to patch themselves up.

As for the main force, it should head to the treasury just ahead of them, and a thief should loot the place, while the rest of the group heads southwest. Position your stronger units and your sword-fighters up front, so they can cut the pirates down to size and secure the entire southern part of the map. Do not attack the boss, but scatter your units so they can level up by taking down the reinforcements (Pirates). However, be careful, as the Pirates may contain axes stronger than the typical Iron Axe.

As for the armory, if you need more powerful weapons than the generic E-Rank ones available in the preparations screen (this preparations shop might only exist in Shadow Dragon), buy some steel weaponry and/or some Javelins to bolster your army's weaponry, though most of them can do fine with iron in the easier modes.

For the boss, be sure to weaken him with the Wyrmslayer or powerful indirect attacks, and let a unit who needs EXP finish him off. Although the reinforcements may have already leveled some of the weaker units, like Julian or Radd, whoever A) you plan to use, B) is strong enough to harm the boss, and C) is at a lower level, should be the one who kills the boss. After claiming all of the treasures and routing the map of enemies, let Marth seize the castle. 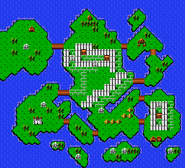