Start a Wiki
The Rebellion of Ostia 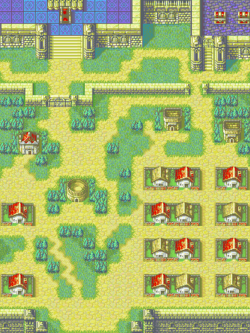 Chapter script
[view]
“After hearing of the rebellion, Roy quickened his pace toward Ostia. According to the information gathered on the way, General Leygance, one of Lord Hector's advisors, had started a rebellion with Lieutenant Devias to sell Ostia to Bern. The unsuspecting Lilina was then captured by Leygance. Instead of killing her outright, Leygance imprisoned her in Castle Ostia, perhaps thinking she could be of some use later on. Hearing the latest report, Roy charged into Ostia to rescue Lilina. The great Lycian city of Ostia was about to become a battlefield, trampled upon and stained with blood.”
—Opening Narration

The Rebellion of Ostia (オスティアの反乱 Osutia no hanran) is Chapter 7 of Fire Emblem: The Binding Blade.

The chapter begins with Roy and company making his way to Ostia after having passed through Thria, both Lycian territories. Roy has been made aware of a growing rebellion in Ostia following the Ostian Marquess Hector's death. The rebellion is lead by General Leygance and Lieutenant Devias, both former members of Ostia's army.

The rebellious group believed that Ostia (and all of Lycia) should surrender to Bern, who was invading, as opposed to fighting them. The rebellious group had also captured Castle Ostia. In capturing the Castle, they had also captured Hector's daughter Lilina; they planned to use her as a hostage to convince those opposed to surrendering to Bern to give in.

Roy rushed towards the city of Ostia, which lay just outside Castle Ostia. Upon reaching the city, Roy and company found it overrun with the rebel forces and a handful of Bern Wyvern Knights. The hostile rebel forces then converged on the group and a battle ensued.

Devias, the second in command of the rebellious forces, led the forces in the city of Ostia from the entrance to Castle Ostia.

See: The Rebellion of Ostia/Script

The battle of Chapter 7: The Rebellion of Ostia takes place in the city of Ostia, just outside Castle Ostia. The battle map is dominated by houses, which mainly cover the lower right side of the map.

To the eastern side of the deployment area is a large number of houses. Many of these houses can be visited and will give out items and weapons. There are four rows of houses (each row being north of the other) each with three houses. These are the gifts given out at the houses:

In the northern part of the map, a large wall divides the Town from the Castle. The wall can be passed in two areas. The first is a two-spaced door directly north of the area (and thus also directly north of the player's deployment area); this can be opened by the thief Chad with his Lockpick. The second entrance is a single spaced entrance in the wall to the east end of the wall; it is always accessible and requires no opening of any kind.

On the opposite side of the wall is a small portion of Castle Ostia. There are two sections of the Castle that reach out onto the map. The first is a small room in the north-eastern corner of the map just north of the single-spaced gap in the wall. The room is blocked by a door and that contains two treasure chests. The treasure chests contain a Rapier, which Roy can use, and a Barrier Staff.

The other section of the Castle that appears on the map is in the north-western corner of the map. It is where the boss Devias waits on a Throne.

Head up to the forests in front of the unit starting position so that your units will be closer and better protected against the units past the forests.

There will be many Cavaliers with Lances, so make sure to have Lance units and Axe units of your own on this chapter.

Bowmen and your Mage unit will also be important, to weaken the Cavaliers as well as causing as much damage as possible to the wyvern knights in the chapter.

After a unit passes north of the wall, separating the areas of the battleground, on turn eight, enemy reinforcements will appear just behind the boss, Devias. These reinforcements include two mages, two archers, and four soldiers.

Also, on the tenth turn, four cavaliers will appear at the south most point of the map where the player's units had originally been deployed. If you're playing on Hard, four more cavaliers will arrive at the same location on the fifteenth turn, and another four on the twentieth turn.

There are three new units that can be recruited in Chapter 7: The Rebellion of Ostia, in Fire Emblem: Fuin No Tsurugi. These units are Zelot, Trec, and Noah.

Zelot is the leader of the small group of Illian mercenaries and senior knight to Trec and Noah. He will appear, along with Trec, at the end of the first turn coming from a house just to the right of the Arena. Zelot is a Level 1 Paladin, and thus, a pre-promoted unit. As a pre-promoted unit, he will easily absorb large amounts of experience points after fighting with or killing an enemy unit, and he will gain very little experience.

Zelot also has considerably poor base stats and growths, limiting his overall use throughout the game; however, he can be useful on occasion.

Zelot can be recruited by having Roy talk to him; Noah or Treck can also speak with him and recruit him after they themselves have been recruited.

Trec is an Illian mercenary and subordinate of Zelot. Trec arrives on the map at the end of the first turn along with Zelot from a house just to the right of the Arena. He becomes recruitable at a much lower level then Zelot and Noah, being only a Level 4 Cavalier. However, he is a very sturdy unit when trained and can become quite useful in the long run when he is trained.

Treck can be recruited by having Roy talk to him; Zelot can also speak with him and recruit him after he himself has been recruited.

Noah is the last unit that can be recruited in this chapter. Noah will appear within the first few turns from the Arena after speaking with Fir. He is much easier to reach and to have Roy talk to as he comes out of the Arena. Noah is also a stronger unit in the long run than Zelot and also more useful than Trec right away, as he comes as a Level 7 Cavalier.

Noah can be recruited by having Roy talk to him; Zelot can also speak with him and recruit him after he himself has been recruited.

The battle in Chapter 7: The Rebellion of Ostia is relatively hard compared to other previous battles in Fire Emblem: The Binding Blade. It involves a large amount of strong units.

The Speed Strategy for Chapter 7 of Fire Emblem: The Binding Blade is particularly difficult to use effectively, due to the layout of the level. The Speed Strategy also includes not visiting houses or picking the chests on the map, making it unrecommended. It also often includes not recruiting Zelot, Trec, and Noah.

The Speed Strategy for the level consists of moving quickly north along the western edge of the map. While positioning units for combat, use the Forested units as an advantage. Quickly sweep up the left side of the arena.

If possible, have Roy talk to Noah when Noah exits the arena. Noah can then ride eastward on his own to attempt to recruit Zelot and Trek. Once all three are recruited (and if they survive attacks by large amounts of enemies), send all three to the south east corner of the map among the houses to try to survive until the battle is won.

As they retreat in this way, have everyone else continue northward past the left side of the arena to the door in the wall separating the town from the Castle. Chad can pick the lock to the door (and thus is needed to perform this strategy) and allow all the other units to swarm forward.

Once all of the advancing units get through the door, quickly converge on the Boss. All the units can then gang up on the Boss and quickly defeat him so that Roy can rush up to the Throne and capture it before the enemy forces catch up to the player's units.

The Normal Strategy for Chapter 7 of Fire Emblem: The Binding Blade is a slow and careful one. As the level includes many enemies among many treasures to be found, it can be difficult to completely receive everything the level has to offer. This strategy includes a method of doing just that.

The player will begin in the deployment area. First, divide your forces into two groups. Send one group to the side left of the area and the other to the right, to evenly combat the enemy forces. Remember to use the Forested spaces as an advantage.

**In Hard Mode, it will be recommended to keep your units together, heading toward Zealot and Treck, since the enemies are stronger and more reinforcements arrive than on Normal Mode. Roy should be kept close to the Arena, so he can talk to Noah. After that, wipe out the enemies around the Arena and get the items in the homes, keeping the reinforcements in mind, which appear turn 10, 15, and 20 with 4 Cavaliers every time!**

The player can then combat the enemy forces with their own in the area around the arena, where the majority of combat in the battle will take place. After the first turn, Zelot and Trec will arrive from a house just to the east of the arena. If Roy is nearby he can walk over and speak with one of them at an opportune chance.

If Roy is prevented from doing so by the current battle, however, he can simply speak to Noah when he comes out of the arena a few turns later. Noah can also speak to Zelot and Trec to recruit them after having been recruited, (also, Zelot can recruit both Trec and Noah by speaking with them, or Trec can speak to Noah and Zelot); however, the first person must speak to Roy, who can recruit all three.

The player's units should take some time to defeat the enemy units. While they do so, a few extra units not participating in the combat can take their time to visit the eight houses spread out over the map.

Be sure to get the Knight Killer lance weapon from the house on the top row, all the way to the right, since enemy Cavalier reinforcements arrive on turn 10!

Once all of the resisting enemy forces near the central area of the map near the Arena are decimated, press onward to the north-east. By this point in the battle, almost all of the enemy forces will have been decimated in the exchange of combat around the Arena. The player can thus safely advance towards the single-space gap in the wall to the east.

By about the time the player gets their main force through the eastern gap in the wall, the units raiding the town's houses of their treasure should be close to meeting back up with the main force.

**On turn 10, four mounted units will also appear at the southernmost point of the map at the original deployment area of the player's units.**

Once the reinforcements from near the Boss are eliminated, the player should divide their forces again. One force, including Roy, should head towards the Boss to slay him while another group stays behind at the western gap in the wall to combat the approaching horsemen upon their arrival. The one group can pick away at the Boss and easily defeat him while the other waits as the horsemen arrive.