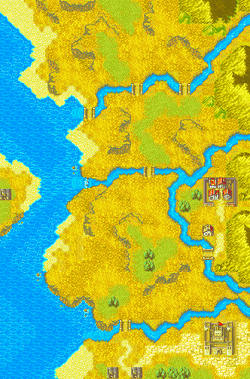 Chapter script
[view]
“The Western Isles were largely divided up into three regions: Fibernia, Caldonia, and Dhia. All of them were rich with natural resources, and mining was a successful industry. In the north of Fibernia stood Mt. Eburacum, home to the largest mining operation on the Western Isles. Roy led his forces towards Eburacum, hoping to gather some information on the bandits. The path to Mt. Eburacum was watched over by a small castle in the valley. Roy sent a messenger to Nord, the castle owner, to be granted permission to pass through his land. Since the Lycia Alliance Army was there on an official mission from Etruria, they didn't think that getting Nord's support would be as difficult as it was...”
—Opening Narration

The Resistance Forces (あらがう者たち Aragau mono tachi) is Chapter 10A of Fire Emblem: The Binding Blade if, in Chapter 9: The Misty Isles, you meet certain conditions (There are two villages in the Northeast of the map, if you visit the village closest to the castle or neither village, then you will go to this chapter).

This is a relatively easy chapter, with the exception of the Ballistae and the Berserkers posing a problem. Avoid the Ballistae like the plague if Shanna is in use. Direct her towards the safer area towards the house.

Now is a good time to train a couple of Sword-users, like Fir, since the Pirate and Fighter reinforcements are ideal to get some experience. if you are planning on training Sin, this chapter will help a lot.

The boss, Nord, can get tough with Nosferatu. In addition, his Defense and Resistance are quite decent. The best idea is to let him attack first, so he won't steal your HP if he hits you because of his full HP. This can help cut his HP by half. In your next turn, if you are lucky and he misses, you will finish him off.

Have a couple of Healers standby just in case. The Barrier staff helps, boosting your resistance which will prevent Nord from healing as much.