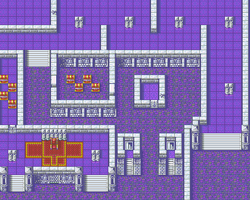 Chapter script
[view]
“Boasting the largest standing force in Lycia, Ostia's military primarily consisted of heavily armored soldiers such as Armor Knights and Generals. With them stalwartly defending Castle Ostia's gates, the castle had long held the reputation of being impregnable. However, that reputation was to be shattered. By Roy, who, ironically, was determined to save the castle.”
—Opening Narration

The Reunion (再会 Saikai) is Chapter 8 in Fire Emblem: The Binding Blade.

The chapter begins with the second part of Roy's siege on Castle Ostia. In the previous chapter, Roy and his accompanying forces arrived in the city of Ostia (in the territory of Ostia), which had been recently overrun by rebel Ostian forces following Marquess Hector of Ostia's death.

The rebels were led by Leygance, a former General of Ostia. They aimed to take control of Ostia and surrender it to Bern, as not to have to fight a war to defend Lycia from Bern. In Chapter 7, however, Roy and his forces overtook the forces on the outside of Castle Ostia and continued their attack, with the aim of liberating Castle Ostia and rescuing Lilina, who had been captured by rebel forces.

The battle of Chapter 8: The Reunion, takes place inside Castle Ostia.

As previously stated, the battle completely takes place inside Castle Ostia. The battlefield thus includes many walls and rooms inside the Castle.

The player's units are originally deployed in the south-eastern corner of the map at the south end of a long hallway running from north to south on the east most side of the map. That hallway then connects with another hallway leading west across the top of the map; this hallway includes pillars that can be used to gain a bonus when a unit stands on them while attacking or defending.

The hallway that goes south on the west side of the map goes downward until it reaches a wall, the other side of which is the Throne Room. The west wall of this hallway divides it from a room attached to the Throne Room containing four treasure chests. Also a locked door to the east side of this hallway connects it to another room containing four chests.

The player's forces can continue forward through a single-spaced hallway leading east along the Throne Room wall or go through the treasure chest filled room. On the other side is a walled off, four-space area in the middle of which is a room where Lilina is being held captive. This room has a breakable wall and a door. An enemy archer will try to kill Lilina every turn. An enemy thief will randomly open the door while he passes by, although he will not attack Lilina.

The path continues south from this area, into a small section bordered by two sets of stairs that enemy reinforcements will arrive from. After going through this area, the player's units can continue west through a passage on the south edge of the map towards the Throne Room.

The Throne Room Contains two pillars and Leygance, who is standing on the Throne space waiting to battle, guarded by two Mages (one with Elfire and one with Aircalibur), as well as a lone Knight.

On the fifth turn, Ogier, Barthe, and Gwendolyn will appear in the walled off room in the north-west corner of the map. They begin as player-controlled units and can break down a wall to exit the room.

At the beginning of the tenth turn, two enemy thieves will appear in the two sets of stairs near the south of the map. The thief on the right side is Cath (unless she died in a previous chapter), and she can be talked to in this level. Once Roy has talked to Cath in three different levels, she will join. In this level, Cath will continue stealing after being talked to. This can be avoided by simply surrounding her with units, or stealing her lockpick, and she will not attack. She can also be stopped by killing her, but this is not recommended if you want to recruit Cath later. The thieves will attempt to steal from treasure chests but will not attack any player units.

On turns 15 through 18, a Mercenary, a Soldier, and an Archer will appear from where Ogier, Barthe, and Gwendolyn appeared, and will move to attack the player on that turn. (Hard mode only)

There are 5 recruitable units in this chapter: Ogier, Barthe, Gwendolyn, Astolfo, and Lilina.

Ogier is a Mercenary unit that appears on the fifth turn with Barthe and Gwendolyn. Ogier will begin at the relatively low level three, but he is easily trained and can become a solid unit. Statistically, his growths are good but not spectacular.

Barthe is a Knight that appears on turn 5 with Ogier and Gwendolyn. Barthe requires no extra training to become on par with other units, as he begins at level 9; however, his growths leave something to be desired. Defensively, he is a rather good unit, but all his other stats are very poor.

Gwendolyn is a Knight that arrives on the fifth turn with Ogier and Barthe. From an objective view, there is little good to be said for Gwendolyn. She joins at a low level and some of the game's worst bases. Though she has fair growth rates, they do little to offset her initial disadvantages. She should not be used unless the player seeks to challenge themselves.

Astolfo is a unit that automatically is recruited at the beginning of this chapter and must be used in this battle. He is a thief unit and begins at level 10, he thus will receive little to no extra training to catch up. He is also particularly useful with the tons of chests in this stage. He is the most defense-oriented thief, and arguably the most reliable, when compared to Chad and Cath.

Lilina is the daughter of Marquess Hector of Ostia, and dear friend of Roy. If Roy talks to her during this level, she will gain a Thunder tome from him. She will start as a level 1 Mage and has her own slightly different mage animation. She has a high magic growth, but little else to recommend, due to her bases being very low and her other growths mostly being mediocre. Lugh is commonly considered a superior alternative, largely due to the wide level lead he likely has at this point, though Lilina can serve as a replacement should Lugh turn out badly.

There is no Speed Strategy for Chapter 8: The Reunion due to the Terrain layout of the battle map.

The normal strategy is somewhat straightforward for this level.

The first thing the player should do is move Lilina out of the archer's range and have one of your cavaliers into the range of the archer at the entrance. The archer will focus attacking the cavalier instead of Lilina.

Quickly advance units along the long, winding hallways while sweeping away any enemy units that are encoutered. The enemy resistance in the hallways along the east and north is rather lax and can easily be defeated.

About the time the player's forces reach the north-west corner of the map, Ogier, Barthe, and Gwendolyn will arrive and can join the forces. They can then continue south along the corridor. Astolfo or Chad can open the first treasure chest filled room and pilfer all the goodies as the rest of the forces pick off a few enemies and plow forward to the right. It is wiser to head through the room full of chests as opposed to the narrow hallway, as taking the latter route will leave your units open to the Mages' advance and attack using their considerably powerful tomes (Elfire and Aircalibur).

At about this point, the two enemy thieves will arrive; on their second turn, one of the thieves will also release Lilina before running off. The player's thieves should take the time to pilfer their Lockpicks to make them useless and have Roy talk to Cath. The force can then move towards where Lilina was/is trapped. If the thief did free her, have her join up with the main force; otherwise, get her out and do the same.

The Boss, Leygance, is particularly more difficult then previous Bosses. He is a promoted General and thus has extremely high defense. The easiest way to defeat him is using the Armorslayer that Ogier comes with. Once he is defeated, Roy can run up to the Throne and capture it to end the battle.