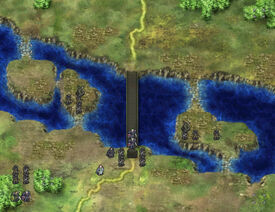 Chapter script
[view]
“Yes, I sent a small portion of our troops to sneak into the enemy camp last night. Crossing the bridge will be difficult with the enemy's ballistae snipping us from the other side, but now we have allies on the enemy's ground to take care of them for us.”
—Eugen detailing his secret plan.

Thanks to Eugen, this map is much easier to deal with. You army will be divided into 3 groups - 2 groups of 3 will handle the 2 Ballistae and the main group of 6 will cross the bridge. Bring all armour killer weapons or magic casters you have as the enemy's troop is mainly formed with armoured units, you will absolutely need them in this map.

Take out the ballistae as soon as possible to have your army freely cross the bridge. The only problem left is the Wood shooter with its Repeater Bow. After taking out one of the enemy's armour knights, move your high defense unit to take out the other knight and sustain the Wood shooter's next attack.