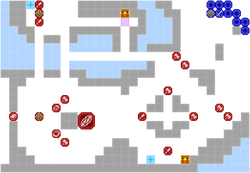 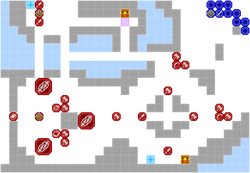 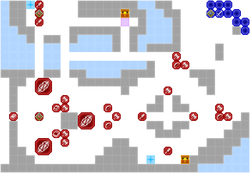 Ladislava
Ferdinand (if not recruited)
Acheron
Lorenz (if not killed in classic mode during part 1.)

“Intent on the Imperial capital, the Kingdom army goes around the Oghma Mountains and marches through Alliance territory as they continue south. But this route takes them through the territory of House Gloucester--Imperial supporters--so they request help from Claude, the leader of House Riegan. Claude agrees to distract House Gloucester's soldiers, and the Kingdom army marches onward toward the Great Bridge of Myrddin to cross the Airmid River, which separates the Alliance and the Empire.”
—Opening narration

Rodrigue recounts to Byleth how his elder son Glenn was slain in the Tragedy of Duscur and how nothing can bring back the dead. Lamenting how the dead never truly let go of their grip on the living, Rodrigue implores Byleth to rein Dimitri's manic desire for revenge in. With the blessing of Claude and House Riegan, the nascent Faerghus army marches to seize control of the Great Bridge of Myrddin from Imperial forces.

On the way, Dimitri declares his intent to wipe out the entire Imperial garrison, to Byleth's continued concern. Dimitri scolds Byleth, bringing up Jeralt's death and asking them to either confirm or deny they too sought revenge for his murder. If Byleth does deny it, Dimitri will continue to scold. them Byleth does admit it, Dimitri will say that it was precisely his point and they were both the same. Felix berates Dimitri for continuing to add to the body count, but Dimitri refuses to listen.

The Kingdom army engages the Imperial army and successfully conquers the bridge and kills General Ladislava.

Early in the battle, if Byleth helped peacefully suppress a rebellion in Duscur five years prior, Dedue unexpectedly reinforces them. He explains that after he was presumed dead in Fhirdiad, he was rescued by his brethren and nursed back to health, and has been waiting for the opportunity to rejoin Dimitri. Dimitri orders him never to throw his life away again.

After the battle, a somewhat unnerved Dimitri convinces himself that the men he killed were just monsters masquerading as humans. Fleche approaches the group in the guise of an ordinary maiden and asks to the Kingdom army in order to avenge her brother; Dimitri, unaware that she is Randolph's sister, accedes to her request.

Dedue will only rejoin if War for the Weak was completed before the end of Chapter 12. Otherwise, he remains unplayable.

If Lorenz was recruited before the end of Chapter 12, he can be re-recruited here by defeating him with any unit, then choosing to spare him - in this case, he will join at the end of the chapter. If Lorenz is killed during the academy phase in classic mode, his generic replacement will show up instead, losing the opportunity to re-recruit him.

Ladislava carries the Aurora Shield, a unique shield that has powerful defensive capabilities, so bringing someone with the Steal ability is useful. The paladin to the north-west also has a Master Seal that can be stolen.

The early groups of enemies can be easily dispatched, but a stronghold to the south of the initial position spawns enemy units. Killing the four units that start the chapter surrounding it stops reinforcements. More reinforcements also spawn from time to time to Ladislava's west. Upon approaching the stronghold, the Duke of Acheron and some enemies spawn to the north of it. Thankfully, it does not count as an ambush spawn so the player has a turn to mount a counterattack.

To the west of the stronghold lies Ladislava and a significant number of enemy units, including three demonic beasts. The demonic beasts patrol the area in a tight circle and only attack when a unit moves much closer to them than their attack range.