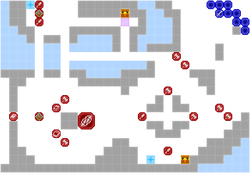 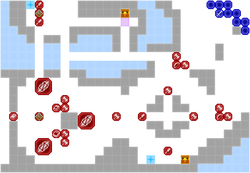 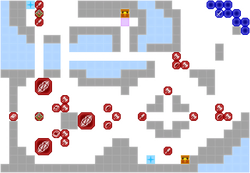 Ladislava
Lorenz (If not killed in part 1 during classic mode.)
Acheron
Paladin

Chapter script
[view]
“The resistance army, having received reinforcements from House Daphnel in Ailell, is finally ready to unleash its invasion on the Imperial territories.”

In accordance with Claude's plan, Resistance forces take advantage of his distraction to storm the Great Bridge of Myrddin and kill General Ladislava. In the aftermath, Seteth pays respect to the Imperial soldiers' courage and tenacity, and postulates that Edelgard is leading the Empire through more than simple fear. Afterwards, Gilbert approaches the group. He reveals that Dimitri survived his apparent execution five years prior, and has been biding his time in Fraldarius territory waiting for the chance to defeat Edelgard. Seteth gives the Kingdom forces his blessing to pass through Myrddin, but is unable to commit Resistance forces to the charge since they are exhausted from taking the bridge.

Reinforcements spawn on the enemy turn

If Lorenz was recruited before the end of Chapter 12, he can be re-recruited here by defeating him with any unit, then choosing to spare him - in this case, he will join at the end of the chapter. If Lorenz is killed during the academy phase in classic mode, his generic replacement will show up instead, losing the opportunity to re-recruit him.