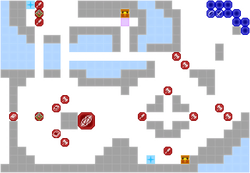 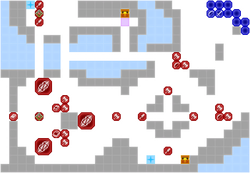 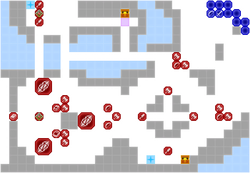 Chapter script
[view]
“We'll take that opportunity to make our way through Gloucester territory and launch a surprise attack on the Great Bridge of Myrddin.”
—Claude

It's best to initially take things slow so that you won't be overwhelmed by Acheron's reinforcements. After dealing with the Weathervane, your next priority should be capturing the nearby fort to stem the tide of reinforcements;speaking of which, retain someone who's capable of dealing with the occasional paladin that spawns at the other end of the main bridge while you do so. If you aren't interested in farming ore from the monsters, Ferdinand will move from his initial location and both of the level's bosses will try to tag team you. As long as you didn't approach the demonic beast that's "patrolling" and keep your distance as the duo approaches, you can easily overpower the bosses since the rest of the army won't engage you unless you've approached them.