Est (Enemy, talk to with Marth)

Chapter script
[view]
“For Gotoh to create the magic that could defeat Gharnef, he needed two orbs: the Lightsphere and the Starsphere. Marth and company set off to Chiasmir and the Fane of Raman to find them, but in their path stood a cohort of Grustian knights known as the Sable Order. The bridges across the strait would soon be choked with the brave and the dead...”
—Opening Narration

The Sable Order is Chapter 18 of Fire Emblem: Shadow Dragon.

This chapter was cut from Book 1 of Fire Emblem: Mystery of the Emblem. There is an Arena which you can use to level up your units.

Est, though appears as an enemy, she will not attack you; rather, she will head straight for Marth to speak with him. She will appear from the west on Turn 6. 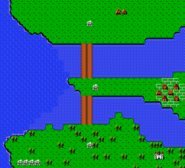