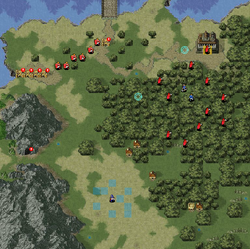 Wendell (if not recruited in Chapter 6x),
Navarre, Phina

Chapter script
[view]
“After liberating Grust, Marth accepted Wendel's request to find the lost Orbs, and headed to Raman Temple. However the ancient temple, built to worship Naga, was wrecked by constant warring and has now become a thieves' hideout. "They're escaping with the temple's valuable treasures. We mustn't let them take them away. We must recover them!!" "We mustn't attract the attention of the soldiers guarding Cashmere Bridge. We don't stand a chance of winning, so don't appoach at all costs." "Also it seems there's a travelling child dancer who's lost her way in the forests. We must rescue her before she gets ambushed by the thieves!" After the troops received their orders, they surrounded Raman Temple. The flame of a new battle was about to ignite.”
—Opening Narration, Mystery of the Emblem

Astram and the heroes will not attack unless approached or anyone steps on the bridge.

Navarre and Phina can retreat to the left with more ease than other directions. Because it can be expected Navarre will fight twice at the beginning of the first player turn, it is easy to reset until both encounters result in Navarre performing critical hits.

It is best to avoid combat with Astram if the player wishes to recruit him later.

The Fire Dragon that spawns from the western cave is quite powerful, boasting high attack and bulk. If you plan to defeat it (Which isn't mandatory), using chip damage units (Mage, Archer, Javelin user) is the way to go. However, don't lurk around the western part of the map too long, as ambush spawns come from the forts north of the cave, and can catch your squishy units off guard.

One of the more convenient ways to get the valuable items most of the Thieves carry is to deploy fliers, park one of them near the bridge at the top of the map and one shot the escaping Thieves with a Silver Lance (You'll have multiple in your convoy at this point). Navarre is also a good candidate to kill a few of the Thieves but it's more RNG dependent on whether he crits and dodges. If you're in a pinch, you can also use the Rescue Staff to blink your units to safety (If you haven't used it up before the chapter), allowing you to turtle the rest of the chapter after getting most if not all of the Thief drops. Missing a Master Seal or the Wo Dao isn't the end of the world as the other drops are FAR better, such as Scorpio which gives the holder +2 Speed, making it priceless for any unit barring staff bots, the Small Bullion, or the Angelic Robe which gives a massive +7 permanently HP, which is great for any unit. The Wo Dao is a great sword, and while swords aren't dominated by lances as much as in Shadow Dragon, they are still beaten overall, meaning you aren't losing much if you let the Wo Dao Thief escape, but if possible, it's one of the best swords in the game, boasting great might and incredible crit, making it great considering enemies don't have luck in New Mystery. 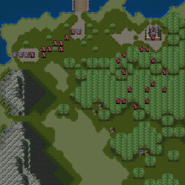