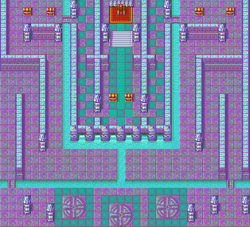 Chapter script
[view]
“Roy ventured deep inside the Temple of Seals. Apparently, there was something else hidden there other than The Binding Blade. However, Pereth, one of Murdock's best lieutenants, was already inside the temple and waiting to ambush Roy.”
—Opening Narration

The Silencing Darkness (黙示の闇 Mokushi no Yami lit. The Darkness of the Revelation) is Chapter 21x of Fire Emblem: The Binding Blade. It is playable if Chapter 21 is cleared within 30 turns with both Melady and Zeiss alive and recruited. Upon clearing this chapter, the S-ranked darkness tome Apocalypse is acquired.

The boss of this chapter is Pereth, a Level 17 Druid. He is best taken out with someone who can avoid his Nosferatu or resist it enough that it will not restore his HP faster than you damage him. If you have a well-trained pegasus or bishop unit, he should go down fairly easily.