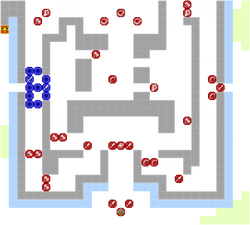 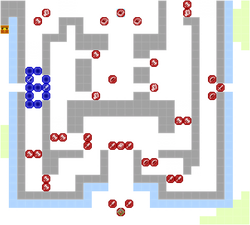 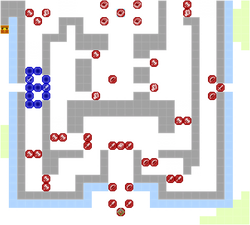 Chapter script
[view]
“Arianrhod, the Fortress City, lies on what was once the border between the Kingdom and the Empire and is a valuable strategic asset. Dimitri intends to reclaim it.”
—Opening Narration

The Silver Maiden is Dimitri's Paralogue Chapter in Fire Emblem: Three Houses. This chapter takes place at Arianrhod, and is only available on the Azure Moon route.

Dimitri receives word that Arianrhod, also named the Silver Maiden, is in the grasp of the Empire. He believes that the Kingdom will be continually attacked at its weakest points unless the fortress is retaken. There are Imperial reinforcements headed to Arianrhod, which will make it more difficult to take back the fortress, and Dimitri has no idea when they will arrive. At the professor's suggestion to go now, Dimitri agrees.

If you’re near the recommend level for this paralogue (41), have the Retribution gambit, and have developed Ingrid as a high avoid mage killer then this map will not take very long. If you have been following along with my other strategy guides, then it should be apparent that developing Ingrid as a high avoid character with strong resistance will help tremendously in dealing with any mages you encounter (Lance Prowess Level 5, Avoid+, Evasion Ring with Luin, a Rapier+, and a Killer Lance+).

Our objectives are to deactivate the floor traps and defeat Hubert. Dimitri will mention deactivating the floor traps as a priority and the game will then show you two levers that would give off the impression of needing to be flipped. However, Dimitri will also comment that the Empire has held the fortress for a while and there may be changes to it (hint, hint). The levers are actually useless, to deactivate the floor traps you will need to kill the central mage (Hanneman if not recruited) at the northern part of the map (surrounded by four other mages) and all of them have Bolting. If you’re interested in the lone chest to the northwest, it contains a single Umbral Steel.

Start by using Retribution on as many characters as possible but make sure Ingrid is included in this group. Move Ingrid to the space near the first lever, but do not throw the lever. Instead, equip either Luin or a Killer Lance+, use wait, and activate Avoid+. During the enemy turn, all five Bolting mages will attack Ingrid along with a War Master but with high enough avoid and resistance, she will likely kill most of these enemies. Keep in mind that if Ingrid does kill the central mage, the floor tiles will immediately deactivate so if you have any fragile characters near these tiles, they will likely be killed by the surrounding Fortress Knights, War Masters, and cavalry units.

Meanwhile, send two or three characters immediately south to deal with the Fortress Knights. Characters with Axebreaker and Levin Swords (likely Byleth and Felix) will be able to finish off these enemies quickly. If Sylvain is a Dark Knight and/or has a Bolt Axe+, he can contribute to this effort. Your remaining squad will be dealing with the War Masters that approach from the central portion of the map and the cavalry units from the southern part so plan accordingly. Don’t forget about Impregnable Wall and Blessing to help protect some units before the enemy turn begins.

If after the first turn, the central mage controlling the floor traps still lives, send Ingrid directly after him and finish him off. Reinforcements will begin to appear on the eastern edge of the map, however, we will not be dealing with the enemies to the east (unless you want the experience).

Continue moving your characters to the south towards Hubert (who has the Meteor spell). It’s easy to forget which characters have Retribution active but remember they can take out any long-range attackers. Between turns 3 and 4, group some of your squad together and include Ingrid in this group. Use the Stride gambit, move her within range of Hubert’s Meteor spell, use wait to reactivate Avoid+, and if strong enough she will finish off Hubert when Retribution activates when he attacks her.

It is worth mentioning that if you kill most of Hubert’s surrounding squad that he will call for reinforcements, which consists of additional cavalry units so if Ingrid does not finish off Hubert during the enemy turn, beware any nearby fragile units that could be killed by these reinforcements.

When the battle starts, you'll find your units all clustered next to an alleyway, which contains a chest with an Umbral Steel... and a way to skip most of the map. If one looks, they'll see that this alleyway goes straight down, with absolutely zero roadblocks visible at first.

You can send all your units down this alley (or just some, if you still want the EXP and drops from the main map's enemies). Once a unit is about halfway down this alley, Hubert will take notice of this, and 6 Fortress Knights will spawn in at the very bottom left corner. However, these can be dealt with by mages, anyone with a magic weapon or extra effectiveness against armored units (an Armorslayer/Rapier is preferable, and should be paired with Axebreaker, especially on higher difficulties), or just a very strong physical attacker (such as Felix or Byleth- again, Axebreaker is recommended, especially on Hard/Maddening).

Once the Fortress Knights are dealt with, the player can go for Hubert. His Defense is much lower than his Res, and Heartseeker lowers the Avo of adjacent enemies, so it's best to kill him with a ranged physical weapon, such as a Bow or the Sublime Creator Sword. The Paladins can be dealt with by a Rapier or Horseslayer if they get in the way.