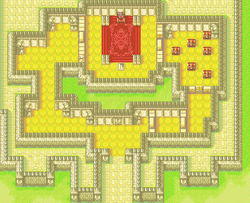 Chapter script
[view]
“After meeting Niime, the "Hermit on the Mountain," the mysteries of Bern's Dragons were slowly beginning to unfold. With more unknowns still needing verification, Roy directed his troops toward a large manor on the outskirts of Bulgar. There, Advisor Roartz of Etruria was preparing his defenses against Roy...”
—Opening Narration

The Silver Wolf (灰色の狼 Haiiro no ōkami) is Chapter 20B of Fire Emblem: The Binding Blade if you take the Sacaen route (which happens if by the end of Chapter 16, the experience points gained by Sue and Sin were more than or equal to that of Shanna and Thea).

Take Niime's quote about not being safe as a warning. There is a lot of long range warfare on this map: Bolting, Killer Ballistae, Berserk Staves, and also Sleep staves. To make it worse, you cannot get at most of them unless you use a Warp, and the Fog of War further complicates your advancement.

Be very careful, as you will be attacked from the start. Make sure to leave one character out with high Resistance or Luck to use up the Sage's Berserk. Another good strategy is to just use restore staves to remove berserk or sleep from your units.

Next, send one or two quick characters, like A-support Clarine and Rutger, out to deal with the enemies coming in, while making sure they are able to avoid the Boltings. Once all the Boltings and Berserk uses are up, feel free to move your units forward.