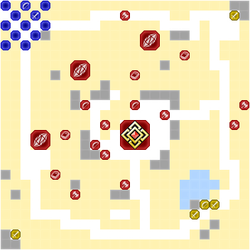 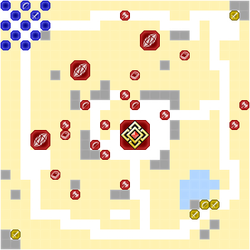 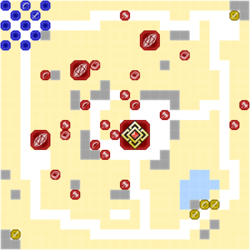 Chapter script
[view]
“And it just so happens that in the Sreng Region, there are ruins built to worship a sacred beast that appeared from across the sea. If the ruins have something to do with Saint Macuil, there could be sacred weapons there...”
—Claude

The Sleeping Sand Legend is Claude's Paralogue Chapter in Fire Emblem: Three Houses. This chapter takes place in the Sreng Desert, and is only available on the Verdant Wind route.

While reading a biography of the Four Saints, Claude becomes curious about the life of Saint Macuil. He tells Byleth a legend about the saint in which Macuil departs Fódlan from the east, crossed the sea and vanished. While musing as to where in Leicester territory Macuil could have departed Fódlan, Claude concludes that it is possible that the saint alighted in the Sreng Region, where there are ruins built to worship a beast that appeared from across the sea. Claude convinces Byleth to join him to investigate.

Player is defeated if Claude falls in battle.

There are a total of 18 enemy units, including The Wind Caller and three Giant Crawlers. In the first Player Phase, a group of 5 thieves make up a third army.

After attacking the boss:

Pretty straightforward until the end. Be sure to bring a unit with the Steal skill so as to take the multiple valuable items when possible, as well as keep them near Byleth (if they do not have Steal themselves) so they can drop off any excess items before stealing from the next target.

Be ready to kill the Wind Caller fast once you have started attacking him. Once the boss is attacked, Wyvern Lords will start spawning frequently from the top and the left edges of the map. On Maddening, this means any unit on the top or left side and not in the walled compound area are probably going to die immediately. Lots of gambits with large area of effect are helpful to inflict an armor break as quickly as possible as he's pretty tanky, hits hard, will potentially double you and has Counterattack.

The third army thieves may be able to hold their own depending on difficulty. If they don't die, they run towards the bottom corner of the map and stay there, but if you want their treasure it is advisable to focus on taking them out before engaging the boss.