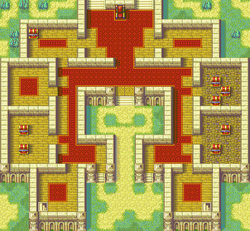 Chapter script
[view]
“After taking Saul, a priest of the Elimine Church, and Dorothy, his bodyguard, into his ranks, Roy led his forces through the mountains into the territory of Thria, located just to the southeast of Ostia. Thria was governed by Lord Orun, a cousin to Lord Hector and known for his peaceful personality. Orun's home castle seemed to be a safe place for Roy to rest. However, Bern's malicious grip had extended to these lands as well...”
—Opening Narration

The chapter begins with the World Map scene explaining Roy and company's trip through Thria, on their way to Ostia, both territories within Lycia. Roy decides that while passing through Thria, he should appeal to Thria's kindly Marquess Orun for a place to rest at Castle Thria.

At Castle Thria, Wagner, a formerly trusted retainer of Marquess Orun, hears of the approach of Roy and his group. Wagner had previously assassinated Marquess Orun to gain control of Thria and prepare to surrender to Bern. Upon hearing about Roy approaching, he discovered that Princess Guinivere of Bern is being escorted by the group; he then forms a plan to ambush Roy's group and capture the Princess so he can hand her over to Bern to gain the country's favour.

Roy and his group eventually arrive at Castle Thria and are invited inside by Wagner, who says Marquess Orun has fallen ill. After letting them inside, Wagner leaves the group in a room and exits briefly to attend to something. While gone, Cath, a thief who had overheard Wagner describing his plans to his soldiers, approaches Roy about Marquess Orun's death and Wagner's plan to ambush them.

After hearing this, Roy decides to make for the exit with his company. They retreat to the Castle's front entrance to leave when Wagner returns and asks where they are going. Roy says they are leaving unless they can immediately see Lord Orun. Upon hearing this, Wagner decides to simply launch a full on attack on Roy's group with Castle Thria's forces. Being surrounded on all sides, Roy decides to flat out capture the entire Castle, and the battle ensues.

The Castle, as it is laid out at the beginning of the battle, is simply a courtyard in the middle with two hallways on either side leading from the two entrances near the southern deployment area. Also at the northern end of the courtyard is a larger entrance, and further north, straight ahead of that is the Throne Room where Wagner is on the Throne.

Along the two hallways on either side of the map are several locked rooms that can only be opened by a thief. The only player-controlled unit that can open these doors along the hallway is Chad, although Cath will appear later on in the battle as an enemy thief unit. She will not attack player units, but she will try to steal the treasure in the locked rooms.

The entire battle map features very few spaces that can be used for terrain bonuses, so terrain does not really come into play.

Like most levels, Chapter 6: The Trap can be quickly won. However, the common method for quickly winning the stage skips over many enemy units and all of the treasure hidden throughout the level (and also Sue), meaning that it is not recommended.

The Speed Strategy for Chapter 6: The Trap, is to, in the first turn, move all of the player's units forwards into the entrance of the hallway near the unit starting point. and create a defensive wall of units. Wait for the units that flank around the hallway to attack (or send some units to them) but not all, since enemy units will spawn from the starting position if all of your units are above the southern half of the map.

Once these units are cleared, move above the southern half so the enemy units appear and you can take them down without having units on both sides.

If you wish to use the speed strategy and recruit Sue as well, send a small group of units with Roy and Chad to the second locked room from the top in the left hallway, after you have gained control of the Throne Room. Have Chad unlock the room and Roy talk to Sue. Then Sue can 'rescue' Roy and carry him quickly back towards the Throne Room. Do all this while your main force picks away at the Boss.

The normal strategy for this level takes considerably longer, but involves defeating all enemy units (except Cath), thus getting the most experience points. It also includes claiming all of the treasure hidden throughout the map's locked rooms. This strategy is recommended.

In the beginning of the battle, be sure to bring the only player-controlled thief at this point in the game, Chad, as he is quite useful in this level. The player's force is deployed to the south and there are three paths in front of the player's units: The courtyard, the left hallway, and the right hallway.

Split up your units into three groups. If you bring Elen, Saul, and Clarine to this chapter, each group can have a healer. Send a larger main unit down the middle through the courtyard to confront the large group of enemy units located at the courtyard's other end. Then also send two smaller groups up either side of the Castle through the hallways. It is preferable to send both Roy and Chad with the small group going through the left hallway.

The two groups going through the hallways can spend the first few turns dispatching the few units gathered in the hallways. Meanwhile, the main unit can slowly but surely defeat the enemy in the courtyard. When all of your units are about 1/3 or 1/2 way up the map, a group of reinforcements will arrive from the south. Turn the main courtyard force around to attack them.

Cath will arrive after about 5 turns; DO NOT attack her, but block her from entering the courtyard or either hallway. Alternatively, Chad can steal her lockpicks then go back to opening chests and doors. This is recommended, since Cath will carry lockpicks every time she appears, this can help you to have lockpicks when they are needed. This will also cause Cath to flee the field.

The groups in the hallways can press forward, and Chad should go and open the locked door that is second from the top on the left. Roy can then walk inside and talk to Sue to recruit her. It helps if Roy is holding a bow that Sue can use, as Sue comes without any weapons. After Roy talks to Sue, he should head south to speak with Cath.

After the enemy's southern reinforcements are dealt with, send the main force charging back up through the courtyard towards the throne room to attack the enemy units there. While they do so, have Chad raid the treasure chests in the locked room that is second from the bottom on the left. Once all enemy units on the map except Cath and the Boss Wagner are defeated, have a few attacking units head to the left hallway. Chad can then open the bottom-most and top-most locked rooms in the left hallway.

The top left room contains ready and waiting enemy units that should be quickly killed. Chad can then open the one chest in that room. The bottom left and right rooms contain stairs that, after a few turns, enemy reinforcements will arrive from, so send an attacking unit or two down there after that door is opened to deal with them.

Once all the left rooms have been raided and the enemies in them killed, move to the right side. The two middle-most rooms on the right contain 5 chests in total, with no guards. Have Chad raid these. Also, the top-right locked room contains enemy units, but nothing else. Open the room, then quickly slay them for experience. The bottom room on the right is similar to the bottom-left room and is empty save some stairs that reinforcements will come from a few turns after the room is opened. Send a unit or two there to dispatch the enemies after the room is opened.

It should also be noted that the two knights on either side of Wagner will not move, but will attack if a unit is within range.

Once all the locked rooms have been opened, and all the enemy units except Cath and the Boss have been killed, have the player-controlled units converge on the Boss. Slowly pick at his Hit Points until he falls. As Wagner has rather high stats for the time meeting him, it's recommended to use a strong unit (Like Marcus with a Silver Lance) against him. Then have Roy walk over and capture the Throne.

There is a single newly recruitable unit in this level; this unit is Sue. Sue can be found by herself, locked in the third locked room from the bottom on the left side. Have Chad pick the lock and Roy talk to her to recruit her. She comes with no weapons or items and needs a bow to fight. She is recruited as a level 1 Nomad, and although she will need extra training to catch up to the rest of the group, she is a strong fighting unit when trained.

Cath will also appear for the first time on this map, although she is not yet recruitable. Cath, the female thief who appears with the southern reinforcements, will appear in several levels to steal treasure in the level. Roy can talk to her, although she won't be recruited right away; in the third chapter that Roy talks to her in, she will join the group. In this chapter, be sure to prevent her from stealing anything from the chests, but make sure not to attack her. (She will not attack you in any occasions).