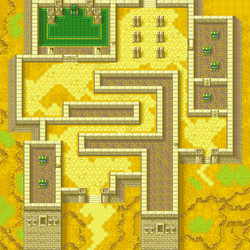 Chapter script
[view]
“To liberate the people of the Western Isles once and for all, Roy headed for Jutes, the Isles' largest city. The Etrurian capital was located there. Lord Arcard, the supervisor of the mining operation on the Isles, resided in Jutes. According to Elffin, Arcard was of high birth, but he held no importance in the Etrurian court. Roy was still worried about Etruria's response to his attacking the capital, but he had no choice if he was going to rescue the people.”
—Opening Narration

The True Enemy (真実の敵 Shinjitsu no teki) is Chapter 12 of Fire Emblem: The Binding Blade.

This chapter is not too difficult, with reinforcements only appearing once, and you should be quite far off from them when they appear. You need to bring Chad and Astolfo along. Basically, your army is split into two groups. The one on the left is your main group. Just charge forward with your mages and nomads to clear the path. When the path is cleared, make Roy and other swordsmen you brought along take on the Axe fighters. Make Chad open all the chests on the left.

Your second group has an easier task. Basically, make someone kill the Fighter with a Killer Axe first. This isn't too difficult. Then kill the Axe fighter and Knight that move in, avoiding the Sniper and Shaman in the middle of the map and make Astolfo open all the chests on the right. Your units should take that route alongside Astolfo, killing the Archers at the north and attacking the Axe fighters at the north west. This group should arrive at the north faster than the first group.

When Cath appears, make Roy go up to her and Talk. Remember to Talk to Raigh, as he is an extremely good character. Just make Lugh, Raigh, and Lilina kill Aine, who is a Manakete with high defense and low Resistance. You will have to be quick because of the Turn Limit to enter Chapter 12x. When all this is done, conquer the throne with Roy.

The boss can only be reasonably damaged with a legendary weapon, a magic tome, or the wyrmslayer.