The Verge of History

The Verge of History 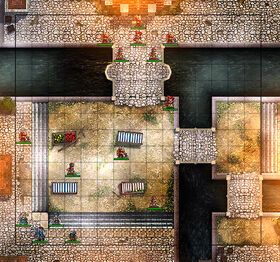 Chapter script
[view]
“Robin is found lying in a field with no memory. After he/she helps Chrom fend off a band of brigands, he/she is welcomed into the Shepherds as a tactician.”
—Opening Narration

The Verge of History (新たなる歴史 Arata naru Rekishi lit. An New History in the Japanese version) is the Prologue of Fire Emblem Awakening. This chapter takes place in Southtown.

The chapter begins with Robin lying unconscious in a field, when they are found and woken by Chrom, Lissa, and Frederick. Robin discovers that they have some strange form of amnesia: they cannot remember their own name, yet they inexplicably know Chrom's. This results in Frederick exercising caution around Robin, as such amnesia makes little sense. However, Chrom decides to bring Robin along to the nearby settlement of Southtown, to make sure that they are not an enemy of the Halidom of Ylisse.

As Chrom and the others head to Southtown, Chrom formally introduces Robin to Lissa and Frederick; during this, Robin suddenly remembers their own name, and Chrom notes how it may be "foreign". Before they can ponder on this further, however, Lissa interrupts them - they have reached Southtown, and it is covered in flames. The Shepherds rush into the danger zone, leaving Robin wondering what to do.

The Shepherds arrive at Southtown to find Garrick and his brigands threatening a Village Maiden. Before they can begin the attack, Robin arrives and offers their aid. With Robin's tactical skills, the Shepherds manage to defeat Garrick and drive off the brigands.

Impressed by Robin's tactical ingenuity, Chrom offers them a place among the Shepherds, in spite of Frederick's concerns, and Robin accepts. After a brief discussion of where the bandits came from, the Shepherds decline the offer of a feast from the villagers (much to Lissa's dismay) and they begin the march back to Ylisstol.

When playing on Normal, a strategy is not needed. Unless you put Lissa in front of all the units and not even try to attack, you can probably win without doing much strategizing. Be sure to let Robin or Chrom to get all the kills, as, although Frederick has fairly decent growths, including a respectable 65% in STR, your two main characters really need more of the experience.

On Hard mode, the enemies have better stats but still pose no serious threat with their weak weapons.
Do not expect to dodge the Barbarians easily like in other games, the Weapon Triangle advantage/disadvantage is dependent on Weapon Rank so they're likely to hit you early on.
Chrom and Robin, paired up or not should be able to dispatch the first group of enemies in 2-3 turns, though you won't be able to double attack any enemy unless Robin's asset is speed and paired up with Chrom.
Should it be necessary, fall back on the second turn to heal a wounded unit while remaining in the range of the surviving enemies.

For the second group, make sure that your unit has full health to ensure they survive all 3 attacks. The mage can do 9 damage to Chrom so be careful.
The boss is also still easy, although you should be wary of the possibility of an unlucky Critical hit.
To ensure survival, allow the boss to attack one separate unit (Chrom can always survive a critical at full health) first on enemy phase for the counter attack damage, then attack with the other and finally finish him off with the first.
On another note, try to heal as much as you can with Lissa, it is more efficient then using Vulneraries, and healers can fall behind in level if they are ignored since they have no other reliable way of gaining experience.

Everything above does not apply here. The enemies are almost doubled, and you will need a very clear and succinct strategy to get out of this one unscathed...or even victorious.

During Avatar creation, having the Asset in Speed is recommended, as the 12-SPD Myrmidons can double and one-round KO Robin if s/he only has 6 Speed. The following strategy will assume this was done.

The rest of the strategy will be less exact, as there are various different ways to approach the next section.

Heal up everybody to max HP with Lissa; this should net you a level. If she gets a point in Speed, she can be attacked by one Barbarian or Mage without dying. Unpair any paired units, and return Frederick's Silver Lance if you removed it.

The next five enemies will charge you once a single member has a unit in their range. Pair Frederick with Chrom, and make him stand one square into the enemy's range, and be sure to make sure he is not in the Mage's attack range. Some strategies prefer to lure the group right and onto the bridge; other strategies lure them downwards toward the center. This strategy will lure them toward the left.

The main thing here is be sure to keep space to retreat. You have to continually run backward until you can safely kill the Mage with Frederick while holding a chokepoint simultaneously, because Myrmidons can still kill Lissa. If Lissa can survive one hit from a Barbarian, use this to your advantage as well. Mages are ridiculously dangerous because they can attack from afar; this means any units in its range is as good as dead.

After defeating the five units, heal everyone again and go deal with the boss. The boss brings even more luck into the equation with the Gamble skill. However, he is still the least of your troubles after the grueling chapter. Simply pair up Frederick with Chrom or Robin, or let Robin sit in front of him with a Thunder tome for some counterattacks before the final blow.

On the first enemy phase, The two barbarians in the lower area should attack Frederick for decent amounts of damage (due to the weapon triangle) and Frederick should bring them down to about 6 HP. The myrmidon will attack Robin and bring them down to low health, but this really is not much of an issue. One of the the two mages of the level will now inch down towards Frederick.

Once you have control again, move your paired-up Robin to the space adjacent to Lissa. Have her heal your Robin, as he/she could probably use the healing. One of the barbarians is now in range to attack Lissa, so you should kill off that one barbarian with Frederick on his turn, while moving him out of the mage's range.

Have Frederick kill off the mage so the it doesn't get a chance to attack. If the second barbarian is still alive, have Chrom kill it with Falchion. The rapier may have higher accuracy, but you'll want to save it for later, especially for Chapter 3. Killing off these enemies ultimately stops the first wave of attackers, giving you ample time to heal and begin attacking again. Be sure to have Lissa heal everyone instead of using Vulneraries, as it gives her experience. Anything that gets Lissa a higher magic stat at this point is a godsend. It may take a few turns to finish healing, but it is worth it. Once you're done healing, place Frederick in the range of the leftmost myrmidon. He should be to the left of the top right "fruit stall" in order to do this. Surround him with your paired up Robin and Lissa to boost his hit rate and avoid.

The myrmidon mentioned earlier will charge to its death. It cannot deal any damage to Frederick, and he can easily kill it. The rest of non boss the enemies will now come down from the top of the stage. You will probably have to face a tight-knit formation of two barbarians, a myrmidon, and a mage.

Have Frederick take out the mage immediately. The earlier you kill mages at this point in the game, the better. None of the other enemies in this group can take on Frederick, so just have them charge him helplessly. Put Robin, Chrom, and Lissa on the upper far left side of the stage, out of enemy range.

Have Robin kill the barbarian above Frederick. Chrom could do this (assuming you put them in a place where you can reach the barbarian) but it gives the barbarian a chance to counter. Frederick should take out the last remaining barbarian. Be sure to move Lissa with the rest of the group.

The only enemy left is Garrick, and he doesn't move. Take this time to heal your characters to full health, and move towards him. Have Frederick attack Garrick first, and then have Chrom pair up with Robin to finish him off. Do not try to attack with Robin, as Garrick can double him/her if Speed is not Robins asset. On top of that, Garrick has the skill Gamble, which raises his critical hit rate over 10%.

The strategies mentioned above still work for the most part, but more planning is needed. This is the first introduction to the powerful enemy-specific skills, which can immensely change the tide of battle. The best strategy here is to continue resetting until the map gives you a set of enemies that are actually possible to beat.

Be extremely wary of the mages here. If either of them have Vantage+, then it's probably best to reset.