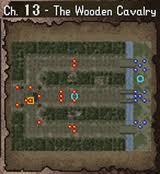 Chapter script
[view]
“The Akaneian heroes hurried in Altea, but they would not go unchallenged. Waiting for them at Fort Menedy were Grust's artillery regiment, the dreaded "Wooden Cavalry." Missiles crashed down, rocking the earth as the enemy ballistae rumbled forward. Had Marth and the League any hope of triumphing over such firepower?”
—Opening Narration

This chapter was cut from Book 1 of Fire Emblem: Mystery of the Emblem. All enemies (except for 2 Thieves, a Curate and Astram) are Ballisticians.

This chapter is hard for Flying units, you can use the Class Swap to transform all your fliers into non-flying, swift units if you want.

There are more than 10 Ballisticians here, so prepare your stronger weapons, because this is hard. Do not take out Mages, because they have low defence and so they can die with one or two shots. Bring Midia in center to recruit Astram. Remember to keep any healers out of balllista range.

A well armored unit like a high level Paladin or General able take several hits from a ballista would be really useful. DracoKnights are also well armored units, but are ineffective and vulnerable against multiple ballistae.

Go to the village and Beck (a ballistician) will join you. Beck comes with a Thunderbolt making him a prime choice to finish off the boss, Grigas.

Grigas has a ballista called Pachyderm that is extremely powerful and his defense is very high, however his Resistance is weak making him vulnerable to the Thunderbolt. Especially on harder difficulties, it is recomended to send high movement non flying units or high defense units to charge into Grigas range, if the player seeks to engage him at melee range.

If you wish to bring magical units for defeating Grigas, you may also use a Warp to teleport that player nearby. However, keep in mind about the surrounding ballisticians near the castle.