Chapter 10B: Caught in the Middle or

Chapter 11A: The Hero of the Western Isles

Kayli Mills
[view]
“General Zelot, I'm sure you know already, but my mission has been accomplished. Still, I wish to remain in this army”
—Thea to Zelot in a support conversation

Thea is a playable character in Fire Emblem: The Binding Blade. She is the middle sister of Juno and Shanna and the commander of a group of Ilian Pegasus Knights.

She makes a brief cameo appearance in chapter 17 of the Fire Emblem: Hasha no Tsurugi manga.

As the poor in Ilia have no choice but to turn to becoming mercenaries to live, the policy that Illian mercenaries should never question their employer was embedded in Thea from her hometown. When her group was employed by the Kingdom of Etruria to work with Klein against the United Lycian Army headed by Roy, she followed suit when Klein joined their ranks.

After the war, she becomes the new flightleader.

Even though her contract expired when she joined the United Lycian Army, she desired to stay with Klein as much as she could due to strong feelings toward him. While she displays the abilities of a masterful leader, she is awkward when it comes to love.

A stern, dutiful middle sister, Thea has problems at expressing affection through words, to the chagrin of her younger sister and love interests, and easily becomes embarrassed.

She is also very protective of her younger and older sisters, going out of her way to make sure they are happy, as she tries to pat the former's head after upsetting her in their B support, and personally arranged the latter's wedding and worries about both her and her baby.

Description: The leader of a pegasus knight unit from Ilia.

Thea has a variety of pros and cons compared to her younger sister Shanna. She has higher constitution and more well rounded stats in Normal and Hard Mode because of her stat bonuses and a larger focus on offense.

However, it is noticeable that compared to Shanna, Thea has almost identical base stats on Normal Mode, despite being 7 levels higher and at least 8 chapters later. Even on Hard Mode, while she does gain significant stat boosts, it more raises her to on par with a similarly-leveled Shanna than above. The biggest issue is giving her experience, as she joins somewhat underleveled for the point she joins in the game at a point that has an abundance of axe users, and could potentially be somewhat behind Shanna in terms of stats and levels. She also has a rather low Lance rank of D, meaning she cannot wield Killer Lances, and will likely be relying on Gant's Lance if it remains intact.

Thankfully for Thea, she is only two levels from promotion, and if the player has been doing well, the Elysian Whip is one of the few promotion items in the campaign to be in good supply at that point. This means that if Thea is having particular issues with her training, the stat and weapon rank jump from promotion at level 15 or even level 10 can usually push her over the edge into viability. Flight utility is also a major factor in her favor, given the various large maps that rely heavily on terrain, and with her Hard Mode bonuses in play, she should at least be able to keep herself out of liability territory for a while.

One quirk to Shanna and Thea is the Ilia/Sacae route split, where, if Shanna and Thea are higher-level than Sue and Sin, the campaign will transition to the Ilia maps, and otherwise, the campaign transitions to the Sacae maps. Most players consider the Ilia campaign to be much less troublesome than the Sacae campaign, which provides some incentive to raise the two Pegasus Knights if the player also plans to make use of one or both Nomads.

All in all, Thea is a mixed bag, but is still one of the better units around. Flying is a rare skill, and while Thea will likely never be your best flier, she is still a good one.

Stormy Flier
The second of three sisters who are Pegasus Knights of Ilia. She is talented and sincere, but she can be lacking in flexibility. Appears in Fire Emblem: The Binding Blade.

Thea - Rider of the Winds (疾風の天馬騎士 Shippū no tenma kishi)
"Thea returned to Ilia, where she worked to reunite the divided Pegasus Knights. Her diligent work and leadership paid off, and the Ilian Pegasus Knights gradually regained their former glory."

Thea is illustrated in the trading card game with the following cards: 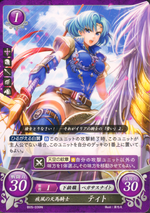 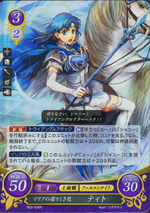 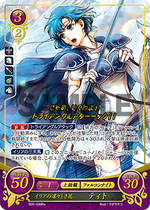 Thea is the Anglicized spelling of Theia, the Titan of sight and "the shining light of the clear blue sky".