A Thicket (茂み) is a terrain space in the Fire Emblem series, usually with the appearance of a dense patch of grass and bushes covering the tile. Units positioned in thickets receive a small bonus to Defense and Avoid. The bonus received depends on the game. Thickets are usually quite difficult for most units to cross easily, and have a high movement cost for certain classes, particularly mounted units and armored knights. On the other hand, thieving characters, such as Rogues or Bandits, and all Laguz units face the least penalties from crossing thickets, and Flying Units are completely unaffected by them, although this privilege also prevents them from receiving any terrain bonuses.

Also, in Path of Radiance and Radiant Dawn, there are special thickets called Healhedges, which will restore about 10% of a unit's health at the beginning of a turn. It is well advised for the player to position units in thickets whenever possible, so that enemies cannot use them. 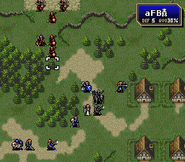 A Thicket in Fire Emblem: Thracia 776.