The Thief (盗賊 Tōzoku) is recurring combat/utility physical class in the Fire Emblem Series. Wielding Swords or Knives as their weapons of choice, the primary role of Thieves is to Steal and manipulate locks imposed on doors and chests. Enemy Thieves are capable of destroying villages, and unlike most other enemies, they often leave battles after accomplishing their self-motivated jobs of pillaging villages and/or looting chests.

In their original inception in Shadow Dragon and the Blade of Light and Mystery of the Emblem, Thieves are unable to promote, and due to being frail combat-wise, are commonly tasked to perform support roles through their lock-picking skills.

The advent of Genealogy of the Holy War sees the Thief (シーフ Shīfu) class being able to promote for the first time in the series. Thief Fighters act as the promoted form of the class and are reputably capable fighters on the battlefield.

In Fire Emblem: The Binding Blade, Thieves continued to be unable to class change.

Thieves are given a new promoted form in The Blazing Blade: the Assassin class, losing the ability to Steal in return for the Lethality skill. In The Sacred Stones, Thieves are given the additional option to promote into the Rogue class alongside Assassin.

In Path of Radiance, Volke is the only Thief who can promote into an Assassin. This promotion is done without an item, and is part of the main plot, in which Volke either leaves or is rehired as an Assassin for a fee of 50,000 gold.

In TearRing Saga: Berwick Saga, Czene, the playable Thief, is able promote into Grassrunner, and is the only thief able to promote at all. They wield Knives, making them good for inflicting injuries to make it easier to capture units. All thieves have the Locktouch and Hide skills and usually possess a stealing skill: Czene and some enemy thieves have Mug, whereas Sedy is the sole user of the Steal skill. There is also a bow variant of the class used by enemy units.

There are no playable Thieves ( Shīfu) to promote in Radiant Dawn, effectively making it an enemy-only class, though it is coded to promote to Rogue within the game. All playable characters in the Thief class line come pre-promoted as Rogues or, in Volke's case, as an Assassin.

In Shadow Dragon and New Mystery of the Emblem, remakes of the Archanea Series, Thieves once again do not promote. However, they are allowed to reach up to Level 30.

In Awakening, Thieves are given the further option to promote into Trickster alongside Assassin.

Thieves are known as Outlaws (シーフ, Shīfu) in the localized versions of Fates and are treated as a Nohrian class. Outlaws wield Bows instead of Swords and Knives. They are given the further option to promote into Bow Knight alongside Adventurer, the Bow using equivalent to the Awakening Trickster. The Hoshidan counterparts to the Outlaw are the Archer class in terms of Reclassing, mirroring Outlaws' bow usage, and are similar to the Ninja class in terms of utility, even sharing the Locktouch skill with the latter class.

The Nohrian thief-type class, Outlaw, reappears in Fire Emblem Warriors as the base class of Niles, in which it acts as a clone of the Archer class. There is also enemy-only versions of both Thief and Outlaw which act as clones of the Myrmidon class, with the added ability to open chests. Additionally, the Hoshidan Ninja and Master Ninja classes act as the Hoshidan variant of the Thief class.

In Three Houses, the Thief Class is an optional promoted class of the Commoner or Noble class if the unit passes the Certification Exam at Lv. 10 with a Sword Skill Level of C or higher and an Intermediate Seal. The other option with these requirements is the Mercenary class.

In addition, there is also an enemy-only variant of the Thief class called Ruffian. Ruffians are much weaker, have no class skills and appear exclusively in the prologue.

The Thief class primarily focuses on agility in combat, and can dodge the majority of enemy attacks. However, their low Strength impairs their utility as combat units as they can rarely inflict heavy damage on foes. When raising a Thief, it is recommended to have hardier units cover them while the Thief concentrates on weakened foes. They are somewhat like weak Myrmidons and score well in the Skill, Speed and (sometimes) Luck departments to offset their lower Strength, Defense and Resistance. Though weak, their high speed means they will double most opponents. Thieves with a high Skill rating can perform regular critical hits. A well-raised Thief can hold their own in combat, dealing reliable damage cause of their high accuracy(skill) while remaining almost completely untouched.

Thieves with low offensive capabilities are still useful as support units. Thieves have higher Movement than other infantry units, making them good for quick assaults or reaching objectives quickly. They can see farther than other units in Fog of War battles, making them perfect for scouting. They can also pilfer supplies from the enemy with their ability to Steal, robbing enemies of assets such as medicine or staves. With sufficient Strength, they can even steal weapons (depending on the game), especially valued if they can steal unique enemy equipment. These, alongside their ability to open doors and treasure chests without keys, make them valuable assets on any player's army. However, as they are physically frail, it is advisable to not leave them unguarded at all times.

When promoted into an Assassin, apart from the normal boost in all parameters, the Thief gains more points in HP, Resistance and Defense than any of their other stats. They lose their ability to steal from enemies, but retain the ability to use Lockpicks. They also gain the Lethality ability, thus making Assassins much more combat-oriented than Thieves. Rogues, conversely, keep all the abilities of the Thief class, becoming even more effective in that regard. Their price to pay is possessing weaker combat stats as compared to Assassins. However, they have a critical bonus, which, while not being as large as the Assassins, is still hefty when compared to that of Thieves.

Save for Lara and Thieves from the Tellius Series and from Genology of the Holy War, all Thieves throughout the series have had the same uniform; common clothing with little/no armour, a cloak to use as a disguise and a bag or sack containing their plunder (this isn't shown during battle sequences or cutscenes). Except those already mentioned, most Thieves come with minute differences between games; like in Fates, Outlaws are shown with a quiver of arrows. While generic male Thieves are shown with their hoods up, female Thieves wear a cloth headpiece to conceal their hair to avoid notice, although this is only shown on map sprites and concept art.

Concept artwork of the Thief class from Genealogy of the Holy War.

Concept artwork of the Thief class from Path of Radiance.

Concept artwork of the unused Thief class from Path of Radiance.

Concept artwork of the Thief class from Radiant Dawn.

Concept artwork of the female variant of the Thief class from Awakening.

Concept artwork of the male variant of the Thief class from Awakening.

Concept art of a female Outlaw from Fates

Concept art of a male Outlaw from Fates

A Level 1 generic Thief, as he appears in the first series of the TCG.

A Level 10 generic Thief, as he appears in the fifth series of the TCG.

Generic CG artwork of the Thief class from the GBA titles.

Generic CG artwork of the Thief class from the DS titles. 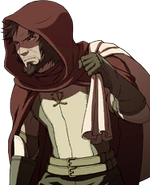 Generic portrait of the Thief class from Awakening.

Battle model of an enemy Thief from Shadow Dragon and the Blade of Light.

Patty as a Thief in Genealogy of the Holy War. 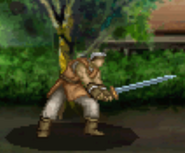 Sprite of the enemy variant of Thief in TearRing Saga

sprite of Yuni, a female thief in TearRing Saga 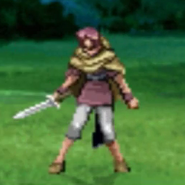 Battle model of Czene, a female thief in Berwick Saga 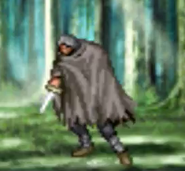 battle model of a generic Thief in Berwick Saga 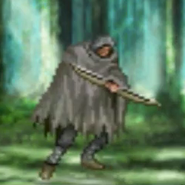 A bow thief in Berwick Saga 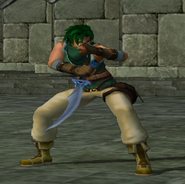 Sothe as a Thief in Path of Radiance.

Volke as a Thief in Path of Radiance.

Gaius as a male Thief in Awakening.

Anna as a female Thief in Awakening. 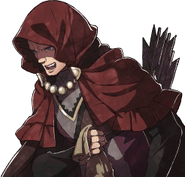 Generic class portrait of an Outlaw from Fates. 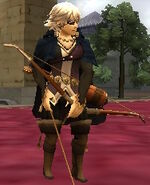 Niles, a male Outlaw from Fates.

Map sprite of the Thief class from Fire Emblem: Shadow Dragon and the Blade of Light.

Map sprite of the Thief class from Fire Emblem: Mystery of the Emblem.

Map sprite of the Thief class from Fire Emblem: The Sacred Stones.

Map sprite of the female variant of the Thief class from Fire Emblem: The Binding Blade.

Map sprite of the Thief class from the DS titles.

Map sprite of the enemy variant of the Thief class from the DS titles.