Accumulate Points (And Rout enemy in the remake)

Fire Emblem: Archanea Saga
Many days have passed since the palace of Archanea was invaded. Rickard and Lena, along with Nabarl and Castor, sneak into the palace to steal treasures to aid the poor, and perhaps themselves as well.

Fire Emblem: New Mystery of the Emblem
Many days have passed since the Archanean royal palace fell to Doluna's forces. At the streets outside the palace, a male and female pair emerge. They are Rickard and Lena.

Thieves' Gang of Justice is Episode 3 of Fire Emblem: Archanea Saga. It was later remade in Fire Emblem: New Mystery of the Emblem. 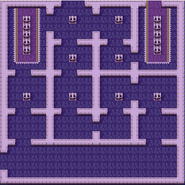 Chapter 3 map in the SNES version.
Add a photo to this gallery