Map 7: Liberation of the Capital

“Why me...? Why do I have to lug around this horrible-smelling contraption, anyway? That blasted Codha... He tells me he wants my archery skills, but he sticks me in this awful moving closet! At least no one can recognize me in this. Barts would laugh his head off if he saw me...”
—Thomas

Thomas (トムス Tomusu, fan translated as Tom) is a playable character from TearRing Saga: Utna Heroes Saga. He is a hunter from the village of Lot and a close friend of Barts. He was supposedly drafted into Codha's army as a hunter, only to find himself piloting a Wood Shooter .

In the ending, it is revealed that Thomas has seven younger siblings, all of whom he works to provide food for.

He appears as an enemy unit in Map 7. To recruit him, have Barts speak to him.

Thomas is not a particularly good unit in the long term. While he joins with decent stats, his growths are poor in everything except for Speed, which his class has a quite low cap in, and Weapon Level, which is only useful to an extent. However, he is a great defensive unit for his first few chapters and takes hits very well, which gives him some usability. 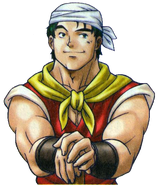 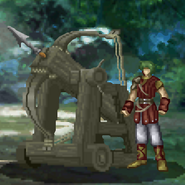