Thoron essentially serves as a class buster against Dragon tribe Laguz in the Tellius Series, where its high Might and Hit Rate allows it user to inflict copious amounts of damage upon them with the utmost precision.

Although this tome is slightly more expensive than its counterparts Bolganone and Tornado in terms of its Cost Per Use, its Might is considerably higher than both variants.

In Fire Emblem: Genealogy of the Holy War, Thoron only appears as a usable tome when Tailtiu is recruited. It is an A-Rank tome, meaning that no base-class heroes can use it (besides Tailtiu, thanks to her minor Thrudd blood), and only a select few promoted classes can. Thoron will be dropped by Ishtore in Chapter 7 upon his defeat. As such, only one instance of Thoron is accessible for the player. It is the second-strongest Thunder spell in the game before the legendary tome Mjölnir.

In Fire Emblem Awakening, Thoron appears as the strongest mass produced Thunder spell in the game, but also has the least accuracy of the three main B-Rank Tomes.

In Fire Emblem Fates, Thoron (雷書トロン Raisho Torōn lit. Thunder Book Tron in the Japanese version) is the signature weapon of Robin, the Avatar of Awakening. Like other amiibo weapons, it cannot be removed from his inventory. It is a moderately powerful tome which also grants Robin a passive 5 bonus points to his Critical Evade and 3 points to his resistance. A visually similar weapon is sold by Robin called Robin's Primer. It is a weaker version of the spell and does not come with the tome's innate bonuses, but retains the same animation and appearance of the Thoron tome.

In Fire Emblem Echoes: Shadows of Valentia, Thoron once again appears as the signature weapon of Robin. It is a Black Magic tome and grants him a 5 point bonus to his Critical hit rate.

In Fire Emblem: Three Houses, Thoron returns to not being a signature weapon, though the changes to magic make it so that not everybody can learn the spell. Thoron now has less usage but has more range than a typical spell.

In Fire Emblem Warriors, Thoron is the Strong IV Combo for all infantry Tome units, where it behaves much as it does in most of the games as a beam of lightning, though Linde's version is different in that it's a AOE attack that ends with a beam hitting forward. Thoron as a tome appears as Robin's personal weapon, though Thoron appears only within the Fire Emblem Awakening DLC Pack. Like the other personal weapons within the game, Thoron's Might can be boosted by creating Mastery and Sanctuary Crests.

*To be replaced by an actual stat sheet as soon as possible.

Thoron is a special move of Robin in Super Smash Bros. for Nintendo 3DS and Wii U. It is the final form of Robin's Standard B move which takes 5 seconds to charge. Thoron appears exactly like it does in Awakening, manifesting as an extremely quick, horizontal bolt of lightning. It can pierce through multiple targets.

Thoron as a spell is the Strong IV combo for Robin and Tharja, and the Strong V combo for Linde in Fire Emblem Warriors, with all but Linde having the spell resemble how it traditionally looks animated. Linde's rendition of Thoron, however, is much different: her Thoron buffers the area around her with lightning strikes before a beam shoots out of the lightning vortex in front of her.

The Thoron tome is most likely named after the Norse god of Thunder, Thor.

The Thoron tome, as it appears in the second series of the TCG.

Thoron being used in Ankoku Ryu to Hikari no Tsurugi.

Animation of an enemy Mage casting Thoron on Julian in Mystery of the Emblem. 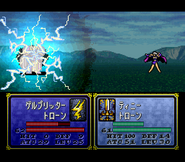 Tine casting Thoron on a Gelben Ritter General in Genealogy of the Holy War.

Map animation of Tine casting Thoron on Sieben in Genealogy of the Holy War. 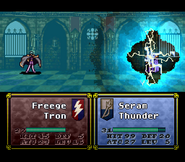 An enemy mage casting Thoron on Salem in Thracia 776.

Ilyana casting Thoron on an enemy Cat in Path of Radiance.

Merric casting Thoron on a Khadein Mage in Shadow Dragon.

Thoron in New Mystery of the Emblem. 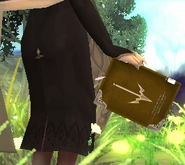 Miriel wielding the tome of Thoron in Awakening.

Maribelle casting Thoron on an enemy Sniper in Awakening.

Robin wielding the tome of Thoron in Fates.

In-game model of the Thoron tome from Heroes.

In-game model of the Tome of Thoron from Heroes.

Tailtiu attacking with Tome of Thoron in Heroes. 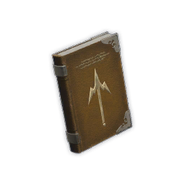