Thrasir is a character in Fire Emblem Heroes. A general of Hel, she shares a name with the founder of Embla.

In ancient times, Thrasir became the first empress of Embla, forming a pact with the Dragon Embla. With the dragon's blood, she gained the power to close portals to other realms. Much like Askran royalty as well as her own descendants, she can bind Heroes to contracts.

In Book III, Chapter 1, Thrasir makes her debut as a general of Hel, attacking the Order of Heroes during Hel's invasion of Askr. She retreats upon defeat, while Alfonse and Sharena consider the fact that they are now fighting the ancestors of both nations. In the following chapter, she once again appears leading Hel's army, and is forced to retreat without a word. She faces the order again alongside Líf. Once both are defeated, and retreats through a portal he creates for them. After the order discovers they are in a ruined Askr, she faces them again before retreating.

Eventually, she reveals that, just like Líf is Alfonse from an alternate timeline, Thrasir is a future version of Veronica, one in which her kingdom also suffered major casualties, including her beloved older brother Bruno. Knowing her own way of thinking, Thrasir intentionally left a book about the weapon the "forbidden heart" created in her version of Embla in order to lure Veronica to the Temple of Blood and kill her counterpart. However, Alfonse, aware that she would likely verify their demise, intentionally sprung the trap and so that they could strike her down. When asked why would she fight for Hel, she bitterly says that no one but Hel can restore Embla and that's why she follows her.

Once Thrasir is defeated and apparently killed, Veronica says that she has no real sympathy for her since one of them had to die. She does, however, promise that Hel will be defeated.

Later, it is shown that before the events leading to her demise, "Thrasir" made a promise to "Líf" that after balancing the cohort of the dead and reviving everyone in their realm, both of them would talk together again as allies and not enemies, which "Líf" agrees to.

Much like her fellow General, Thrasir speaks little. Having been resurrected as a General of Hel, she is committed to destroying all worlds. According to Alfonse, Thrasir was said to possess enough power to raze entire realms.

Later on, after it is revealed that she is an alternate timeline adult Veronica, Thrasir is shown to have a more cordial relationship with Líf, the alternate version of Alfonse. She speaks to him with little of her former hostility towards him, even appreciating his company following the loss of her older brother. She even requests Líf that they be able to speak together again as allies once their mission is complete.

Much like her younger self, Thrasir cares about her brother Bruno a lot, with her signature tome being a present from him which, while worn out, she treasures it. On the other hand, she doesn't view her past self as kindly, calling her foolish and beyond help, as well as being adamant on others calling her by her alias, as she is not like the main Veronica and tries to distance away from identifying with her.

Omnicidal Witch
General of the realm of the dead. At her queen's command, this witch uses her powers to swell the ranks of the dead.

Thrasir is a green tome infantry Anima Mythic Hero that immediately established herself as a prime Aether Raids defense unit. With 33 neutral Atk and 39 neutral Spd, she hits incredibly hard and is likely to double. Due to her kit and effects, she absolutely enjoys having an asset in Spd the most to ensure that she reaps the full benefits of her skills. Her mixed bulk is on the weak side and can take significant damage from her foes if she is caught out, but her strengths from her kit gives her surprising explosive player turns.
Ífingr grants her effective damage against dragons, helping to threaten some powerful dragon units like Legendary & Fallen Tiki, Naga, Fallen Female Corrin, and Mila. Also if she is within 3 spaces of an ally, she gains +4 to her four core stats and negates effects that guarantee follow-up attacks for her enemy. With these boosts, she can threaten a high number of enemy turn oriented character. The only downside of this effect is that after combat, she then inflicts a -4 debuff to her nearest ally, which can have unintentional consequences for a key teammate.
Killing Intent is her unique skill and if she is either attacking a foe that is not at full health or has an inflicted penalty such as a stat debuff or a visible condition like【Isolation】she can inflict a Spd/Res-5 debuff on her foe and if she initiates combat she can perform her follow-up immediately before her. This in tandem with Ífingr allows her to dominate most enemy phase units, even some Reds like Altina and Idunn due to pure brute force.
Moonbow ignores 30% of her foe's Res when it activates and since she can quickly charge it, she can unleash it in a single turn. Flashing Blade 4 grants her special acceleration and adds an additional +5 true damage to her attacks so long as she has greater Spd than her foe. Panic Smoke inflicts【Panic】on her foe, syncing perfectly with Killing Intent, after combat and also inflicts the status on foes within two spaces of her target.

Baiting out Thrasir is ill advised as her player turn strengths from her skills allow her to overcome even most powerful red defensive units. The best way to deal with her is to go on the offensive and attack her first as she loses a ton of strength during her enemy phase. Her bulk overall is decent, but not particularly strong enough to sustain many hits if any.

Thrasir has a near flawless base kit that only needs an Assist skill to complete it. Reposition or Draw Back are two excellent skills to give her positioning options. For scoring, a "+" Rally skill is advised.

Thrasir is illustrated in the trading card game Fire Emblem Cipher with the following cards: 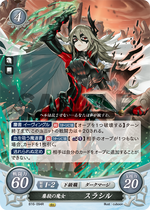 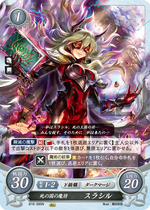 Thrasir or þrasir is Old Norse for "lover". In Norse Mythology, Líf and Lífþrasir are the last woman and man respectively who are destined to survive the events of Ragnarok and repopulate the earth.