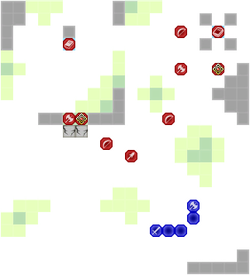 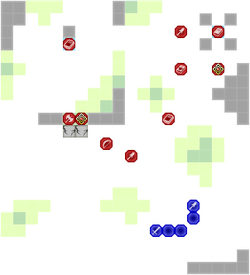 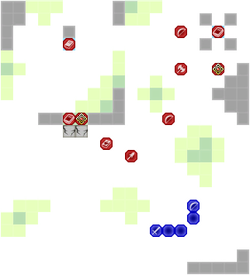 Chapter script
[view]
“In a few days' time, there will be a mock battle between the three houses, intended to guage the current progress of the students. We will be using this battle to ascertain your own abilities as well. Please do not disappoint the archbishop. That is all.”
—Seteth

Under Alois's insistence, Byleth and Jeralt are brought to Garreg Mach Monastery. Byleth is introduced to Rhea, the current Archbishop of the Church of Seiros, who thanks the two for protecting the three students from the bandits. Impressed by their skill, Rhea asks Byleth to become a professor for the Officers Academy as the previously hired professor fled from the same bandit attack. While her assistant Seteth expresses his doubts in hiring a stranger, Rhea remains firm in her decision. She also asks Jeralt to rejoin the Knights of Seiros of which he was a captain, prior to his sudden resignation 20 years prior. He reluctantly agrees after Byleth also accepts her offer to teach the students.

Byleth is ordered to meet the Officer Academy's students. Byleth soon discovers that Edelgard, Dimitri and Claude are the house leaders of the the Black Eagles, Blue Lions, and Golden Deer respectively. After getting a more formal introduction of themselves and their fellow classmates, Byleth chooses one of them to lead alongside fellow professors Hanneman and Manuela, beginning the school year. Hanneman also requests Byleth to come to their office and see if they have a Crest using a special device. To their astonishment, not only do they have a Crest, but also one that no one has ever seen before, giving Byleth some air of mystery.

After meeting with their chosen house's students, the first event for the school year is a mock battle between the three houses. Eager to see their skills in action, the strategy for the upcoming battle is left to Byleth. The battle proves to be a challenge, but ultimately Byleth's class earns a decisive victory.

Byleth will choose one of the three houses to teach, automatically granting immediate access to eight fixed characters of their chosen house:

As this chapter is a mock-battle, fallen units are not lost, even if the file is set to Classic Mode.

This will be your first opportunity to explore Garreg Mach Monastery, however, your options are limited. All students can be conversed with, even allowing you to gain Support points with some if you respond to their conversation favorable. At this point, only four options are available:

Most other facilities are closed off for now.

If DLC has been downloaded for Three Houses, they are immediately available upon your first visit to the Monastery.

If at least a single route of Three Houses have been completed, new bonus features are immediately available upon your first visit to the Monastery. Any excess Renown can be spent to immediately improve Byleth's Professor Rank, Subject Proficiency, Support Ranks, and class mastery to the highest level achieved in all previous playthroughs. Renown can also be spent to buy Dragon Signs, Crest Stone items that imbue an ally with a Crest, even if they do not naturally have one. The amiibo Gazebo unlocks a new area in the Holy Tomb where better items appear and Sothis will grant a new ability for Byleth, the Sothis Shield, once talked to.

All units who were recruited in the previous playthroughs who have different appearances between phases will have the ability to freely change their appearance into their Academy and War Phase appearances. The House Leaders will also have new hair styles available.

This is the first real battle of the game, but it is a very light one as you are given access to the students of the House you have chosen for this battle and this is a Mock Battle, one of two in the game. Your deployed units do gain experience, however any unit aside from Byleth and the House Leader who falls will not die, even if playing on Classic Mode. If Byleth or the house leader falls, the battle must be completely restart from the beginning as a game mechanic is not accessible at this point.

While it is stated that this is a battle between the three houses, in reality it is actually your class against the other two. You can only bring, aside from Byleth and your chosen House's leader, four additional units. You can essentially run whoever you please as this is the first taste of battle, however there are a few units to consider bringing:

The remaining students brought into battle are flexible enough for the player to choose who they please as the rest are minor physical variations of each other at this point since every student has only their raw base stats for this battle. Some are great for baiting out units thanks to their sheer physical defense like Dedue or Raphael and others are great for damage such as Felix or Hilda.

Healing, as mentioned above, is really thin this battle as your primary healer will only have five casts of Heal thus using the Vulnerary in every unit's inventory is going to be your go to healing once that has been exhausted.

The starting enemy formation will differ depending on the house you are leading, but Manuela and Hanneman will always start on a Heal tile to the Northwest and Northeast respectively with their assigned class position near them:

Rushing in recklessly is ill advised even though there is no consequence from allowing your units to lose. Since most of your opponents will be physical, you can usually bait most out with other as no unit should go down in a single round of combat at this point. You can go one at a time or bait up to two of the units and safely gang up on them with your seven units. The unit using the forest will be particularly problematic since they will be taking advantage of the evasion bonus it provides. Mages can avoid this since Magic ignores the terrain boost, though the House Leader in the forest will have a ranged option available so you can go for the huge risk if looking to take them out quickly. Otherwise, encircling them or diving into the forest will neutralize the boost as well. The units under Hanneman's lead do not have any sort of terrain advantage, though they can use the forest near the entrance their area, though you yourself can place your units in there to take advantage of them as well.

When securing a kill, if not using Byleth to finish them off, placing them next to the character who will will grant them an experience boost and will help maximize training. This will not only apply here, but in all future battles and is particularly useful on Hard and Maddening where training is limited.

Hanneman and Manuela will be the most difficult opponents on the map given that they are the highest level units on the map, are in a Beginner Class, and standing on a tile that improves their Defense and heals them every turn. This does allow you to Boss Abuse a little if desired to help get your units on the map to master their Noble/Commoner class as quickly as possible. As mentioned above, Lindhardt, Mercedes, and Marianne should take full advantage of this just to get them to the Priest class as quickly as possible and get the HP +5 skill since more HP is beneficial at this point where stats are low and it essentially provides a 20% HP boost.