King of Phoenicis
King of the United Bird Tribes

Joey Pepin (Radiant Dawn)
Joe J. Thomas (Heroes)
[view]
“To wing, brothers! Keep up with me if you can!”
— Tibarn, to his fellow hawk laguz when charging over the Ribahn River.

Tibarn is a playable character in Fire Emblem: Path of Radiance and Fire Emblem: Radiant Dawn. He is the Hawk King of Phoenicis. Despite his collected manner, he can be blinded by his dislike of beorc, particularly those of Begnion. He was shown, at several times, to be a savage, unforgiving warrior.

Blessed with a strong physique that is extremely rare for a hawk, Tibarn ordered the hawks to plunder both Begnion noble and merchant ships in the sea of Gazaleah in retribution for the massacre at Serenes Forest –which was perceived as an ultimate betrayal against the laguz. They quickly came to be feared as the “Shipless Pirates” –though they would only raid Begnion ships. The neighboring Kingdom of Kilvas, however, would raid almost any ship, resulting in giving them all a bad reputation. Despite this, Tibarn would still tolerate their neighbor’s actions up until the Mad King's War.

While sheltering the former king of Serenes and Reyson, Tibarn witnesses the Apostle’s actions in helping aid in the search of Princess Leanne and the eventual restoration of Serenes Forest. His prejudice against beorc quelled, he sends both his wingmen Ulki and Janaff to aid the Crimean Liberation Army, while Tibarn himself continues to serve as Reyson’s personal guardian while fighting alongside Ike the rest of the war.

When Crown Prince Rafiel of Serenes had returned from the eastern lands of Hatari, he brought with him dire news of how the Begnion senators were the true masterminds behind the Serenes Massacre. Hearing this, Tibarn and the Serenes royals petitioned Begnion to explain themselves and reveal the truth. However, the Senate claimed the accusation was groundless and sent no reply. Enraged, Tibarn teamed up with the Kingdoms of Kilvas and Gallia to form an alliance, and sent one final warning to the senate. The senate replied by murdering the messenger, however, which led to an all-out war between the laguz and beorc.

In the war between the Laguz Alliance and Begnion, he engaged Begnion's supreme general, Zelgius, to save Ranulf from being killed. He also led the third of Yune's forces, the Hawk Army, in Part IV. In the second part of endgame he tries to attack the Black Knight on account of Lotz's death but backs off, realizing that it is Ike's fight and not his. After Ashera is defeated, the bird tribes, consisting of the Hawk, Raven and Heron tribes, were united, and Tibarn was made the king of the united bird tribes.

Tibarn is very brave and headstrong, although he does not simply jump into things without thinking about them first. He has a strong sense of honor, as he lets Zelgius go when the Senate calls for him, returning the favor that he got from Zelgius. However, he is willing to use less than honorable actions when the situation demands it, such as when he threatened to throw Sothe off a cliff to stop the battle or his piracy (though out of indignation). He isn't a forgive-and-forget type of person, however, and makes it clear that he wants to destroy Naesala after the raven betrayed the Laguz Alliance. He is protective of Reyson and is friends with him and his sister, Leanne. He seems to share a love of fighting with Nailah. Unlike other birds, Tibarn punches in his untransformed state, and it thus shown to be a left handed character, however in his animation he has his arms crossed right handed. In a support with Ike and Reyson, it is told that his favorite foods are raw meat, insects, and cold fish.

Though he initially possessed a great hatred and distrust of beorc due to the Serenes Massacre, this was changed through his interactions with Ike, and he proudly acknowledges the bond of trust between the Hawk Nation and Ike's army.

In terms of pure stats, Tibarn might very well be the best unit in the game. Like the other Laguz Royals, Tibarn comes with the ability Formshift, allowing him to remain permanently transformed. Almost anything Tibarn attacks will die, due to his ridiculous base stats and Tear, and due to his flight he will easily reach many enemies. His base Speed is 40, which coincidentally is the magic number needed to double every enemy unit for the rest of the game. Defensively he will rarely ever even be hit due to his incredibly high avoid, and his very strong defensive stats mean he will rarely be hurt when hit (except from a Crossbow or Wind tome, the only things Tibarn needs to be wary of).

The only downsides of Tibarn are that he lacks the ability to counter effectively at 1-2 range, which is a trait shared by all other Laguz, and he joins incredibly late. However, Tibarn is so immeasurably powerful that it is more than worth making room for him on any team.

Lord of the Air
King of Phoenicis, the nation of the hawk laguz. Leads his people by dint of his overwhelming fighting ability and charisma. Appears in Fire Emblem: Radiant Dawn.

Tibarn was among the first Beast units introduced into the game, leading the charge as the primary red beast unit as well as having Flier status attached for good measure. He immediately gained presence thanks to a strong offensive presence mainly due to a powerful weapon and stats that help maximize its effects, most of which is focused onto his Atk, having one of the highest base totals at neutral with a massive 55. He also has moderate Spd and solid physical bulk.

Though he has solid Spd, it ultimately only affects his opponent’s ability to attack him as Hawk King Claw guarantees a follow-up attack so long as he initiates combat on an enemy at 100% HP. He also carries the beast effect of transforming either if he is not adjacent to any ally or only adjacent to a dragon/beast unit. If he transforms, his range gains one extra tile of movement plus another +2 Atk. With the right teammates, Tibarn can zoom across the battlefield, tearing through his enemies through his sheer force.

Draconic Aura boosts his Atk by 30%, granting him about 16 additional Atk when it activates and when combined with his Sturdy Impact, he can achieve a 63 neutral Atk when initiating combat, pushed to 82 with a Draconic Aura activated. Sturdy Impact also grants +10 Def and denies foes from counterattacking when initiating, making it hard for enemies to counterattack him physically. Chill Attack further impacts enemy offense for the foe with the highest Atk, inflicting a -7 Atk penalty to the enemy with the highest Atk. Finally Even Attack Wave increase his Atk, as well as adjacent ally Atk, at the start of even numbered turns, providing a self-buff that, when combined with all of the aforementioned skills, gives him an unparalleled Atk stat that basically finishes off most units except for the bulkiest of blue units.

Tibarn may have one of the highest Atk potentials in the game, but he still is unable to fully demolish through physical bulky blue units such as Fallen Hardin, Brave Hector, and Lukas as they all have the physical bulk and the color advantage to mitigate most of his damage. If they can be kept safe, blue mages are also a solid answer to Tibarn as he is sorely lacking in magical bulk, so units like Ophelia, Reinhardt, and Ishtar make for solid answers. Finally his status as a Beast and Flier leaves him vulnerable to weapons that address these types, namely bows. Legendary Lucina and Halloween Niles are solid answers with both the flier effectiveness and color advantage

Tibarn already has powerful skill as his disposal and requires a minimal amount of external inheritance to round out his set. Reposition is a standard support for ally positioning manipulation purposes while Bonfire is a better fit as a fast charging, powerful special that benefits from his good Def stat. Chill Defense is a better fit for his Skill B as it is better to lower defenses of his opponents so he can just outright kill them without sparing them the opportunity to retaliate against him with reduced Atk damage.

Shipless Pirate
King of Phoenicis, the nation of the Hawk Tribe of laguz. Swooping in just in time to participate in the pirate festival by coincidence. Appears in Fire Emblem: Radiant Dawn.

Pirate Tibarn is the first combat oriented flying colorless beast in Heroes and is perched particularly well to decimate foes unprepared for the incredible offensive capabilities he possesses. His impressive 41 base Atk gives him incredible damage potential and while his Spd is somewhat middling at 30, he more than makes up for this through the sheer strength of his kit skills. He also has a decent physical bulk score of 78, but his low Res at neutral 18 paints a very clear cut weakness in terms of his bulk. All-in-all, Pirate Tibarn has strong stats, but his skill kit is where he gets the most of his power and makes him one of the most powerful beast units available.
Sky-Pirate Claw gives him special cooldown acceleration and if he is able to transform under his Beast weapon's effect, he also gains an additional Atk+2 and +1 to his movement, effectively giving him cavalry range and retaining his flying ability to move over any terrain. During combat, if he is not adjacent to an ally, he gains +5 Atk, inflicts -5 Atk on his foe, and is given a guaranteed follow-up attack. Pirate Tibarn's overall offensive pressure from his weapon alone makes him a formidable threat to his enemies, but he has far more to offer still.
In combination with his base weapon, Pirate Tibarn makes excellent usage of Galeforce as he can quickly charge it in a few attacks and relentlessly tear through enemy teams unprepared for his hyper aggressive movement and damage. With a massive neutral 55 Atk, if his Atk is greater than his foe's, Heavy Blade 4 further speeds his special cooldowns and adds +5 true damage to his attacks for good measure. Dive-Bomb is a new Skill B that allows Pirate Tibarn and any other melee flier sneak in their follow-up attacks before their foe can counterattack, ensuring that Pirate Tibarn tears any of his foes asunder before they are able to retaliate. Finally Attack Smoke inflicts Atk-7 on foes within two spaces of him after he finishes combat.

Pirate Tibarn is a glass cannon built to shred enemies during his turn. When on the defensive, his paper thin Res makes him an easy target for most if not all mages. Merric and Asbel are strong counters since their weapons carry extra effective damage against flier units. Bow units also make for nice counters since they too deal effective damage. While not explicitly a weakness all the time, bad A.I. can inadvertently place him next to one of his allies, thus providing the player with an opportunity to exploit him without a majority of his preferred weapon effects.

Pirate Tibarn's only empty skill is his Assist Skill which the standard Reposition fills nicely. For the most part, Pirate Tibarn is best left forcing on going all out on a build that emphasizes his performance when initiating combat. Skill A can be replaced with Sturdy Impact as the flat increase to his Atk and huge Def boost while removing his foe's counterattack make him even more oppressive during his turn. Defense Smoke also better softens his foes so he can hit even harder against them.

“Blast! I've got to get out of here! Sorry for all the trouble.”
—Tibarn's Death Quote

Tibarn was chosen as the first king of the unified bird clans, and brought them great respect from the other nations.

Tibarn is illustrated in the trading card game Fire Emblem Cipher with the following cards: 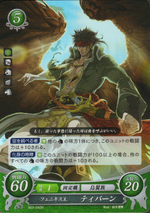 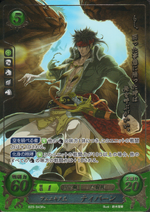 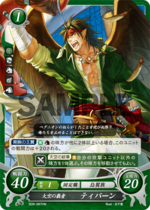 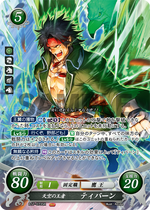 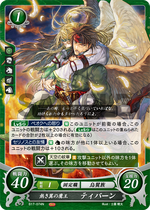