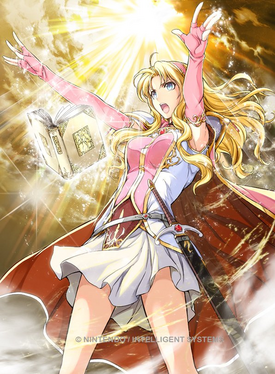 Tiena is the heroine of the Fire Emblem: Hasha no Tsurugi manga. She is the princess of Tania, a bit of a tomboy, and a notable wielder of healing magic. She is a niece of Marquess Worde, Lord Ranward.

During Bern's invasion of Lycia, Tania was one of the territories caught up in the conflict. When Tania's castle fell, Tiena and her guardian, Gant, attempted to escape with a Pegasus Knight squadron but they were defeated by Bern's soldiers. Tiena was detained at Graizel Execution Court and Gant was forced to work for Bern, with the false hope that Tiena would be kept safe. Later, Tiena was freed in a rescue attempt by Al, Gant and some knights of Tania. She travels to her uncle's castle in Worde, only to fall into an enemy trap. Later, she witnesses the death of her uncle. She then follows Al and Gant after they decide to help Roy with his task of defeating the bandits plaguing the Western Isles. At this point, she begins fighting with a sword, akin to the Princess class seen in several games in the Fire Emblem series. Eventually, Roy's army marches toward Bern, and Tiena is given the Aureola tome for use in the final battle. After the war, she marries Al.

Tiena is illustrated in the trading card game Fire Emblem Cipher with the following cards: 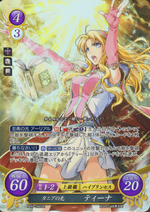 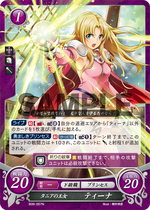 Tiena as a High Princess in Fire Emblem 0 (Cipher).

Tiena as a Princess in Fire Emblem 0 (Cipher).

Tiena being impolite to Al while Chad is talking.