Tigris (ドライ Dorai, Drei in the Japanese version) is one of the twelve Deadlords, and appears in Fire Emblem: Genealogy of the Holy War, Fire Emblem: Thracia 776, and Fire Emblem Awakening.

In Fire Emblem: Genealogy of the Holy War, little is mentioned about the Deadlords, but they are all fought in the Final Chapter near Belhalla and eventually defeated, including Tigris himself.

In Fire Emblem: Thracia 776, Tigris is fought in the Final Chapter. The character who becomes Tigris is Dagdar, if Chapter 8x is skipped.

Axe users in Genealogy of the Holy War are generally encumbered by the massive weight of axes. This essentially decreases their attack speeds as a result, and is reflected in the case of Tigris. It is thus recommended to exploit this weakness of his, and attack him with either Larcei or Ulster. As the both of them wield swords (which essentially beat axes), alongside their Awareness skill nullifying Tigris' Wrath skill, he should fall relatively quickly. Alternatively, hit him with ranged attacks, since he can't counter or put his Wrath to use that way.

Tigris is one of the weakest Warlords in the Final Chapter. He possesses no skills, and his attack speed of 11 means that he is most likely unable to perform double attacks. The player should, however, stay vigilant to the 1~2 range of Tigris' Master Axe, as his relatively high raw power and consecutive attacks can easily spell doom for a unit should you get unlucky.

The Deadlords' names are Latin words for the animals of the Chinese zodiac. The zodiac's third sign is the tiger, which in Latin is tigris.

Drei, Tigris' Japanese name, is the German word for the number 3. 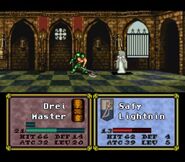