Priest
[view]
“I wanted to help you, so I left the city... But then I was captured by a thief named Perne, and he made me his slave...”
—Tina, in a conversation with Safy

Tina is a playable character from Fire Emblem: Thracia 776. She is a 15-year-old cleric from Tahra and the younger sister of Safy.

Tina first appears in Chapter 12, where she brings a warm dinner that she made to Salem, who had volunteered to serve as sentry for the Dandelion Gang's hideout. Before she returns to the hideout, Salem promises to aid her in her search for Safy.

When Leif's army attacks the Dandelion Gang's hideout in Chapter 12x, Tina is forced to aid Perne in his battle against them. Safy can speak to Tina in this chapter, allowing the two sisters to be reunited. No longer forced to serve Perne, Tina happily joins Leif's army, where she is struck by admiration for the prince, whom she dreamily describes as handsome.

Tina's terrible base Magic is the only obstacle to the staff's use, but it can be temporarily remedied through the use of Pure Water and permanently remedied by raising her with the Heim, Sety, and Fala scrolls equipped, boosting her already high magic growth to a staggering 95%.

“Thank you for letting me go. I'll go look for my big sister Safy now.”
—Tina's quote if released after capture in Thracia 776.

"Even after returning to Tahra, Tina never was able to sit still. Ever oblivious, she would often go wandering about unattended, worrying those around her, especially her sister. Did the day ever come where she would finally settle down? We'll never know, since no such records exist." 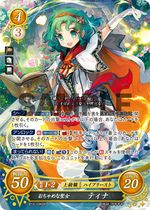 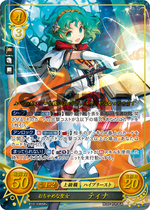 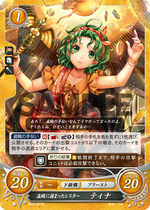 Artwork of Tina in Fire Emblem 0 (Cipher) by Fumi.