Courtney Lin
[view]
“The villagers all think they're an army of liberators, but why did they have to kill Ishtore? Oh, I don't know what to do. Mother... I wish you were here...”
—Tine

Tine is a playable character from Fire Emblem: Genealogy of the Holy War. She is the daughter of Tailtiu and the younger sister of Arthur. Through her mother, she is a descendant of Thrud, a granddaughter of Reptor, the niece of Bloom and Ethnia, and a cousin of Ishtar, Ishtore, Amid, and Linda. Her substitute character is Linda.

Tine was born in Silesse, where she lived her earliest years with Tailtiu and Arthur. When she was still an infant, Bloom arrives in Silesse and forcibly took both her and Tailtiu, bringing them back to Ulster.

During this time, Tailtiu and Tine were like prisoners to Bloom and his wife, Hilda. Tine witnessed the brutal abuse that Tailtiu endured from Hilda eventually resulting in Tailtiu's death. Because of this, she despises not only Hilda, but also Bloom because he never stood up for her or her mother. However, she was close to both Ishtar and Ishtore, both of whom were very kind to her. She also inherited her mother's compassion and sense of justice, and while Bloom ruled over Northern Thracia's people with an iron fist, Tine often left her residence to help the common people, making them more sympathetic to her compared to others within Bloom's ranks.

Once Tine reunites with Arthur and joins the Liberation Army led by Seliph, her self-esteem begins to heal. She also starts to remember her earlier life clearer, particularly Tailtiu's putting up with abuses from Hilda so that her daughter would be protected from said abuses and survive, even if it drove her further to sorrow. If she fights Bloom or Hilda in battle, she will call them out on their treatment of Tailtiu before proceeding to attack them.

Tine's future also differs greatly depending on who she romances. Should Tine marry Seliph, she will became the next empress of Grannvale.

Tine is known for her shy and insecure demeanor, closely resembling her mother’s, due to witnessing Hilda’s abuses of Tailtiu and her eventual death. However, her self esteem improves after meeting Seliph and she regains the confidence to stand up to Hilda return to Friege by the end of the game. In her lovers conversation with Seliph, he tells her to get back, only for her to say that she wants to stay by his side and not end up like Deirdre, with Seliph agreeing and the two staying together, showing that she is a kindhearted person.

* Any advancement in levels for the selected weapon types is dependent on the identity of Tine's father.

Tine is generally seen as one of the lesser units of the second generation, inheriting many of her mother's issues. Like Tailtiu, she is footlocked, joins somewhat later than preferable, and natively lacks Pursuit. She also has some issues of her own, namely her Mage class's base C-rank in Thunder. This means she cannot inherit her mother's prized Thoron tome, as her rank is only B to Tailtiu's A, meaning her offense in the early game is not as impressive as it could be. She can use Thoron on promotion, thankfully, along with B-rank staves, which will make her somewhat more useful. Wrath makes her a strong hitter when damaged, and means that clearing the arena with Tine is not too tricky.

As Tine tends to be mediocre regardless of parentage, focusing more on her brother Arthur is common, due to his earlier joining time and mount access. Thankfully, their skillsets overlap quite a bit, so what helps Arthur will generally suit Tine as well. Lewyn, though not as outrageously beneficial to her as Arthur, grants Tine very high Speed and the ability to use Elwind, and pick up Musar's tornado in Chapter 9, along with two helpful skills in Adept and Critical. Azelle provides the benefits of high Speed, Magic, and Pursuit, giving her strong and stable offense where Lewyn can be unreliable. Lex offers Vantage and Paragon, which make Tine fast to level and synergize well with her existing Wrath skill to let her wipe out enemies without taking a counter, though her Magic will take a minor hit. Lastly, Claud is actually better for her than for Arthur, as Bragi blood will enable her to use A-rank staves such as Rescue and Fortify, though this does deprive her of useful skills.

In Chapter 7, Arthur can recruit Tine by speaking to her.

In Chapter 7, Tine may speak to Seliph, but nothing will result of it.

In Chapter 8, after Conote is captured, Seliph may speak to Tine, and she will gain three points of HP and 100 love points with him.

In Chapter 10, after Rados Castle is captured, if Lewyn is Tine's father, Seliph may speak to Tine, and she will gain five points of Magic.

In the Final Chapter, if neither Arthur nor Tine has a lover, he may speak to her, and she will gain one point of luck.

In the Final Chapter, if Tine's lover is either Seliph, Ced, or Leif, she may speak to him, and he will gain three points of magic.

Rumbling Thunder
Niece of Bloom, ruler of Ulster and duke of Friege. Reuniting with her older brother, Arthur, she joins the liberation army. Appears in Fire Emblem: Genealogy of the Holy War.

Tine/Genealogy of the Holy War Quotes

Tine is illustrated in the trading card game with the following cards: 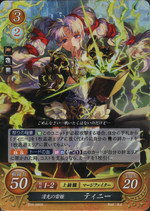 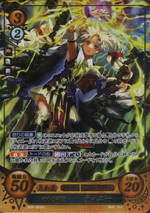 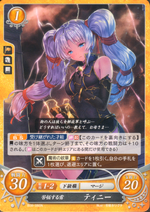 Tine's is derived from the old English name "Tina", it means "river". Can also be a shortened version of Christine and its variations, meaning "christian".