Deputy Commander of the Greil Mercenaries

Misty Lee
[view]
“...Yes, I’m sure of it. Ike will definitely find reasons for us to fight and live. He’ll pick the right path. I won’t have to tell him anything. All we have to do is believe in Ike and follow him...to the end.”
—Titania in a support conversation with Rhys

Titania is a playable character from Fire Emblem: Path of Radiance and Fire Emblem: Radiant Dawn. She is the vice-captain of the Greil Mercenaries that is lead by Greil and later Ike. She serves as an adviser of sorts to Ike and often expresses views that clash with those of his close friend and strategist, Soren.

Titania was once a knight in service to Crimea. During her time as a knight, she entered an officer exchange program and was sent to Gallia, where she first met Greil. Although she trembled at the sight of his strength, she decided to fight him in a battle, but he swiftly beat her. When Titania asked him to train her, he agreed and they began to spar in their spare hours. After a few weeks, they became fairly close and he invited her to his home. It was at that time that she met his wife, Elena, and his children, Ike and Mist. Eventually, she developed unrequited feelings for Greil, but she kept it as a secret. Her one-sided love continues even after Elena's death, but she still keeps it to herself, as she knows that Greil had dearly loved his wife.

Titania was in the Greil's Mercenaries group since it's inception, always supporting and advising it's first leader Greil and having the role of second in command. She acted as a motherly figure to both Ike and Mist, during their formative years, protecting members like them both and Boyd while seeing them growing up and assisting their training. This is exemplified when she chastised Boyd for being reckless and slacking off of his training.

In Path of Radiance, Titania expresses immense grief and pain over Greil's death and eventually asks Ike to reveal the details about the circumstances of Greil's death, getting frustrated upon discovering that he was killed by Black Knight but Ike had hidden the details from her. She also shows her strong support of Ike's succession of the Company, and believes that he carries the same ideals as Greil did. Her first task after Ike becomes the leader of the group is contacting a merchant group composed by Aimee, Muston, Ilyana, Daniel and Jorge, who would travel with them offering weapons and other equipements in exchange.

Titania is responsible, honorable and disciplined knight. She is rather serious, due to all burdens that she carries but never expresses, as she dislikes talking about her past. She is reserved but is very caring towards all of the members of the Greil Mercenaries, having the role as both mother and big sister figure to the younger ones. She is also a stern taskmaster, and has good business sense, being the one that takes care of the finances and other daily life matters of the company.

She accepts Ike wholeheartedly when he is placed in charge of the Greil Mercenaries and works hard to always support him. She loves Greil deeply and mourns him even three years after his death, despite hidding her feelings. Titania's world views and advices often clash with Soren, since she is idealistic and focuses on acting accordinly to what she believes to be moral and good for all, while he has a cynical and misanthropic approach in his decision making.

Titania is regarded by many to be the best unit in Path of Radiance, and for good reasons. She is the first promoted unit obtained by the player, occupying the Paladin class, as is tradition. The first draw to Titania is her high base stats: with 14 Speed, she doubles every enemy in the first eight chapters of the game's Hard Mode at base, while 12 Strength means that not only does she usually inflict heavy damage, but she also takes very little speed loss from her lances and axes. 33 HP and 11 Defense are also rather high benchmarks; even bosses frequently struggle to kill her in less than four hits, and generic enemies deal around 5 damage. From this mighty initial performance, one might expect that Titania has no long-term potential, but this would be inaccurate; Titania has some of the best growths in the game, with average growths in Strength and Luck and above-average ones in Speed, Skill, Resistance, Defense, and HP. This ensures that it is very unlikely for her to fall off; even in the lategame, she will usually have some of the highest Resistance of your physical units. Though Bonus Experience makes other units easier to level, Titania has a very easy time of securing Bonus Experience, due to her skill at fulfilling objectives.

Another major benefit to Titania is her class. As a Paladin, she boasts eight Movement, access to the two strongest weapon types in lances and axes with good ranks in both, the ability to rescue any unmounted ally, and the ability to move after taking any action, even attacking. This gives Titania extreme flexibility: she can retreat after attacking, strike at range or in melee, gain weapon triangle advantage, carry an ally to the battlefield, or forge ahead of the army to secure an objective. The only units to surpass her from a class perspective are flier units like Jill and Marcia, and they lack her amazing start. Titania can even make use of the Knight Ward, upping her Speed growth to a colossal 80% and ensuring she can double all but the fastest enemies of the endgame.

Titania's Light affinity boosts her Defense and hit rate; while the latter is mostly not a problem, the former can help her endure attacks even more often. This makes Mist her best partner, as they share defense-boosting affinities and Mist is mounted after promotion, meaning they can stay together easily. Boyd, Ike, and Rhys are all workable fallback options. Titania's Counter skill is not harmful, but not particularly remarkable; her high defenses and the skill's low activation rate mean she will usually be dealing only a few points of damage to the enemy. Though she does not particularly need them, if the player does desire to give her stronger skills, there are a few good options: Savior will improve her as a rescuer, and Sol places another level of durability on her.

Overall, Titania will typically be by far your best unit in the first third of the game, one of your best units in the middle portion, and still a solid combatant in the endgame. There are few reasons to not use her.

In Radiant Dawn, Titania appears alongside the other Greil Mercenaries members, and becomes playable at the beginning of Part 3. Although her bases are very good for the time she joins, they are not comparatively as strong as she was upon recruitment in Path of Radiance. Her growths excel in HP, Strength, Skill, and Speed. Her base HP is quite low, but a Seraph Robe mitigates this easily. Her Defense and Resistance growths are quite low, but they'll grow occasionally and have high promotion bonuses.

Upon promotion, she gains swords, but they are mostly useless on her, because they are usually significantly weaker than Axes, and Titania has excellent skill so her axe hitrates are rarely an issue. One may find use with giving her a Wyrmslayer though.

Titania has a light affinity which gives a minor defense and accuracy boost. She benefits from supporting with Ike and his Earth affinity which gives her more avoid, and they're on the same Part 4 team. Otherwise, for the most part, Titania benefits from supporting characters that give her a defense/avoid boost and share part 3 and part 4 chapters with her (examples include Oscar and Mist).

Overall, Titania is a powerful paladin and her main "weakness" comes from her mediocre defenses.

Warm Knight
Talented second-in-command of the Greil Mercenaries. Her heart stirs at the reunion of Ike and Greil. Appears in Fire Emblem: Path of Radiance. 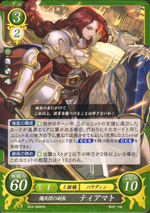 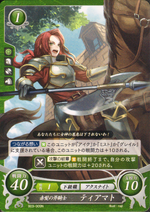 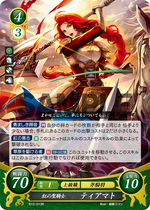 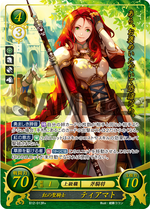 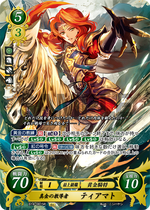 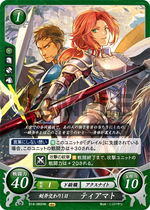 Her Japanese name, Tiamat, is a goddess from Babylonian mythology, often associated with the sea and considered to be the embodiment of primordial chaos. Modern culture and video games (such as the Final Fantasy series) tend to depict Tiamat as a dragon or a hydra due to influence from Dungeons & Dragons.