To Slay a God

To Slay a God 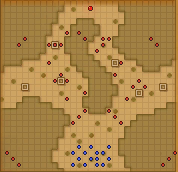 To Slay a God (神殺しの法, Kamigoroshi no Hō lit. The Method of the Godslayer in the Japanese version) is Chapter 25 of Fire Emblem Awakening. The chapter takes place in Origin Peak.

This chapter can be very difficult if you take it slowly and your characters aren't leveled/reclassed at least a couple of times. Over the course of the game, you are bound to have the equipment to be able to complete this chapter in a couple of turns. There will be a large number of enemy reinforcements arriving, so unless you need to level up a bit more, they can be ignored. Your goal is to defeat Aversa, but she is far away from your starting area.

What you can do is power up your characters with Rally skills (such as Spectrum and Magic) and use a Rescue Chain all the way to Aversa (you need one Magic user with high move and high magic, so give Anna or Lissa a Magic Tonic and any Spirit Dust you may have). This does require someone who can go over the mountain terrain (such as a flying unit). This could be Anna, assuming she reached Level 15 as a Trickster, but Lissa reclassed into a Falcon Knight can do it as well. Having both makes it even easier. Then you can boost a single attacker with Rally skills to defeat Aversa very quickly.

Aversa herself has fairly high stats, but almost any Pair Up combination with both characters making use of her physical weaknesses (a forged Beast Killer, Bows, or a Noble Rapier) and reaching 50 Speed (through Speed Tonic, Pair-Ups and Rally skills) make it very possible to defeat her in one round of attacks. With the right amount of stat boosts, weapons, and skills, Aversa should go down quite quickly. If you do not mind resetting, you can even use a character with Lethality for a last-resort option.