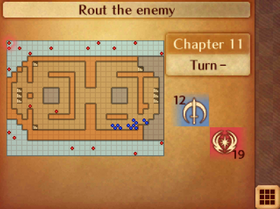 Once you reach the midwest and western end of the ship respectively, a ar on the map. Le and m come to you, w will appear on the map. Let them come to you, while ensuring that your units are outside of their attack range. Defeating them will yield an Knight starts and a Mjölnir. The Malig Knight starts or they, so don't put units in its attack range or they may get killed from it.