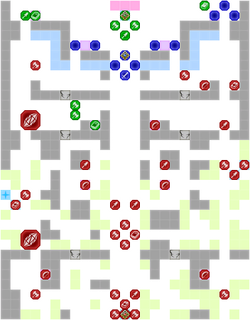 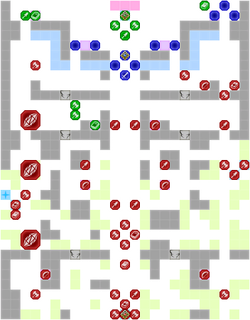 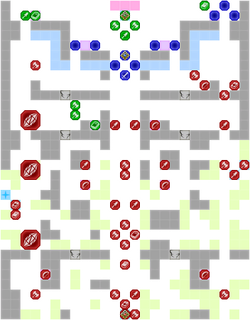 Chapter script
[view]
“Haha! Of course, of course. But don't mistake my intentions. Edelgard will die by my hand, and mine alone. Let's move professor. Even if it costs me my life, I won't rest until I've crushed her skull with my bare hands!”
—Dimitri

To War is the twelfth chapter of Fire Emblem: Three Houses for players who chose to lead the Blue Lions. This chapter serves as the bridge to the Azure Moon story.

*WARNING!* This is the final month to recruit any remaining characters from the other houses into the Blue Lions.

The player is tasked with defending Rhea and the capture point, located in the north. They must contend with demonic beasts in the west, the Death Knight to the east, as well as Randolph and Ladislava's ground troops in the center. Enemy pegasus knights dot the map. An allied army assists the player's army. While it is weak relative to Edelgard's army and its numbers dwindle quickly as the level unfolds, they are useful distractions. Many of the allied units have battalions that can save the playthrough in a pinch.

Both Randolph and Ladislava deal heavy damage, particularly on higher difficulties. However, they can be immobilized and safely dealt with with battalions. The Death Knight remains stationary on lower difficulties, but can move from turn 1 on Maddening. He can kill most of the player's units in one round, but he can be killed by Lysithea in one shot if she is sufficiently leveled.

Defeating Hubert to the west and the Death Knight to the east cause Shamir and Catherine, respectively to spawn there as allies. If either or both are recruited, they are replaced by a generic Sniper or Swordmaster, respectively. Regardless, these allies are very powerful, even on Maddening, and can help cut down and distract the rest of the enemy army.

This is the last chapter before a time skip. All weapons in inventories are automatically fully repaired for free after it, so usage of powerful weapons effectively has no drawbacks. On the other hand, no weapons in the convoy are repaired, so it can be a good idea to fill units' inventories with damaged and powerful weapons for this chapter. In the following chapter, only Byleth and Dimitri are initially available, so making sure they have a good inventory before ending the mission can make the next mission much easier. Dimitri automatically reclasses to High Lord the following chapter.