To the End of a Dream

To The End of a Dream 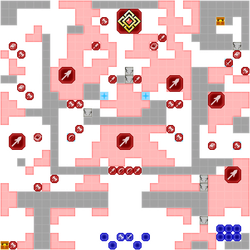 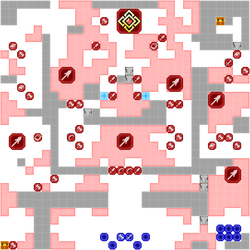 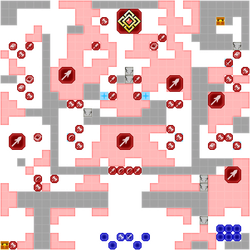 Byleth, Edelgard and 10 others

Chapter script
[view]
“After defeating the Kingdom army and King Dimitri on the Tailtean Plains, Imperial forces set their sights on Fhirdiad, the Kingdom Capital. The final battle against Rhea draws near.”
—Opening Narration

To the End of a Dream is the 18th and Final Chapter of the Crimson Flower route of Fire Emblem: Three Houses. It is not possible to return to Garreg Mach Monastery during this chapter; the previous chapter and this one must be completed consecutively. This chapter consists solely of a mission, The Fight for Fhirdiad. This chapter takes place in Fhirdiad.

See Main Article: To the End of a Dream/Script.

Lord Arundel meets the Adrestian Empire on the road to Fhirdiad, ostensibly to watch humanity take back Fódlan with his own two eyes. Afterward, Edelgard takes Byleth somewhere private to reveal that they and Rhea share a bloodline with the goddess, likely through Byleth's mother, and that they hold a special place in her heart for siding with her instead of Rhea.

The Black Eagle Strike Force arrives in Fhirdiad, and Edelgard offers the members of the Church of Seiros a chance to surrender. Meanwhile, Rhea orders Catherine to set fire to Fhirdiad, much to the latter's shock, and transforms into the Immaculate One. Edelgard rallies her friends and companions one last time, and the final showdown begins. The Adrestians engage Rhea, the Church of Seiros and remaining soldiers of the Holy Kingdom of Faerghus in a tumultuous battle, and emerge victorious.

Byleth and Edelgard together land the killing blow against the Immaculate One, but shortly afterward Byleth drops dead as the power of Sothis leaves them and Edelgard mourns over her professor's death. However, the Crest Stone implanted in their heart disintegrates and their heart begins to beat for the first time. Having united Fódlan, the Black Eagle Strike Force return to Garreg Mach Monastery and Edelgard begins her campaign to stop Arundel and Those Who Slither in the Dark.

Tip: Use all remaining stat boosting items with this being your final battle

This map will try to force you into a panic with the fiery floor covering a good portion of it. Just accept that a lot of your units will be taking periodic damage throughout and heal as necessary. Many of the recommend weapons above heal after every turn when equipped and if you still have Dorothea around then you are aware of her ability to heal adjacent allies at the start of turns. Remember these tactics even when you are advancing your team but not taking any actions. You likely also have equipment like Goddess Rings, Prayer Rings, and abilities like Renewal to counteract the periodic damage. Lastly, some strategies discourage the use of cavalry units as their movement range is limited due to the fiery floor. You can still use cavalry units, but you can use the Dismount command to increase their movement range. Most of your units will have decreased movement range regardless.

The map lays out three paths to Rhea. The recommended route is directly up the middle as there is no benefit to defeating additional enemies on the other routes with this being the last battle.

Similar to the last battle, your team is split into two. Have your group nearest to the Snipers and Paladins aggro the group to your team and defeat them while you reunite your team on the right with the ones in the center. As you approach the first Golem that only has an attack range of one, aggro the Sniper and the two Great Knights to the left. The Sniper will likely use its Fusillade gambit so have Restore ability ready. Take these enemies out after.

Before you begin attacking the Golem, notice the four Pegasus Knights to the north of it overlap the area of attack for the Golem. Also, notate the two Mages with Bolting (one to the slight northeast, the other to the northwest). We will deal with the mages shortly, but first move a few characters within the range of the Pegasus Knights and use the Impregnable Wall gambit. Make sure to have your Snipers, Dancer, and other long-range attackers nearby. Beware that one of the Pegasus Knights may use the Assembly gambit when attacking. Again, have your Restore unit nearby to cancel this out during your next turn. Use abilities like Hunter’s Volley, Deadeye, Encloser, and equipment like Parthia, Killer Bow+, Iron Bow+ (higher accuracy) to take out the Pegasus Knight when they are within range. After they are defeated, take out the Golem. Try to limit your use of attack gambits as we will need them for the Immaculate One.

Once the Pegasus Knights and the Golem are dealt with, we will work on the enemies surrounding Gilbert, Ashe/Sniper, and the two Bolting mages. If Jeritza is high level and has the Counterattack ability from mastering the Death Knight class, move him to the right within the range of one of the Great Knights and the Bolting range to the northeast, equip the Scythe of Sariel, and use a Pure Water. He should be strong enough to withstand a tomahawk attack from the Great Knight and then use his Counterattack ability to kill the mage that will use Bolting. Meanwhile, have your other personnel take out the two Fortress Knights surrounding Ashe/Sniper. Do not kill Ashe/Sniper or Gilbert yet and do not ascend the steps behind either one.

At this point, you need to decide whether you want to kill Ashe/Sniper and Gilbert. For the purposes of this strategy guide I will proceed in that both will be defeated but know that this can be skipped. Only defeat one of them per turn. Killing either one will bring three Pegasus Knight reinforcements for each one. So if you kill Gilbert, three Pegasus Knights will emerge from the east side of the map, and for Ashe, three more will appear on the western part of the map. Focus on killing one, wait for the reinforcements to arrive, then take out the Pegasus Knights with your Snipers, long-range attackers, etc. Repeat this process for the other side. Note that when Gilbert is killed, Annette/Warlock to the northwest will automatically aggro along with a few surrounding enemies.

Once this is finished, use our Jeritza/Counterattack/Scythe/Pure Water combo within the range of the last Bolting mage on the western part of the map. Beware the Golems on both the western and eastern parts of the map that have an attack range of three spaces when doing this.

At this point, the path will look almost clear to the Immaculate One but we have one more wave of reinforcements to deal with. If any of your characters ascent the stairs that are directly behind Ashe and Gilbert, a final wave of reinforcements will arrive during the enemy turn to the south. This will consist of four Pegasus Knights and two Holy Knights. To prepare for this, have one of your weaker characters ascend the stairs and have the rest of your team near the central area where you fought the Golem. This may be the one instance where you consider using a gambit as the Pegasus Knights have a high avoid rate. The Holy Knights should be little threat to a Grappler/War Master with Tomebreaker equipped.

Next we’re going to work on dealing with the two Golems in the central area along with Cyril and any remaining cavalry units. The Golem on the right is the closest of the two to aggro towards your group. Take it out but do not waste gambits on it when doing so. Use Impregnable Wall (try to keep at least two uses of it to deal with Catherine and Cyril) if needed to withstand its attacks as it has a high critical hit rate. Ignore the left Golem in the central area for now.

Continue moving your group north but stay outside of the range of Cyril and Rhea for now. Once you begin attacking the Immaculate One, all remaining enemies become aggro, including Cyril and Catherine. Therefore, its better to deal with Cyril and Catherine before attacking the Immaculate One. Use Impregnable Wall on the unit that will take the attack from both to draw each one out. Cyril has extremely high avoid so linked attacks and a gambit from a high charm character might be needed. Giving a high dexterity Sniper an Accuracy Ring can also help. When dealing with Catherine, the surrounding Bishop and Fortress Knights will also aggro. Take them out too.

Once all aggro enemies, Cyril, and Catherine are dealt with its time to approach the Immaculate One. Gambits like Stride and Impregnable Wall can help you get your team closer with the limited movement range from the fiery floor tiles. If you have been hanging on to a fully repaired Aymr with Edelgard, it is nearly time to unleash it.

After the armor break, use the Aymr combat art, Raging Storm, until the weapon is exhausted. This will give Edelgard an amazing six hits during a single turn of fighting the Immaculate One and additionally Raging Storm has additional might against dragons. Keep at it, use Divine Pulse as needed, combat arts like Windsweep, and unleash your strongest attacks. Once done, congratulations! You have beaten the Crimson Flower play through on maddening!