Robbie Daymond
[view]
“Lukas keeps talking about kings and politics, but that does little for me. I’m actually just in it for the gold. I have a family to feed, after all. Well, that and I’m not about to let you outshine me!”
—Tobin to Alm in Shadows of Valentia.

Tobin is a playable character from Fire Emblem Gaiden and its remake, Fire Emblem Echoes: Shadows of Valentia.

Tobin is a Villager from Ram Village and one of Alm's childhood friends. He joined the Deliverance in order to travel the continent and gain money to support his large family.

After the war, Tobin joined the knighthood of Valentia and sought Clair's hand in marriage, only to lose to his best friend, Gray. However, he continued to serve Alm regardless. Eventually, the king granted him a title and castle of his own as a reward for his loyalty and friendship. If Gray dies in the war, though, Tobin suffers a strong bout of depression and while he joins the military and excels in it, he never fully recovers.

While Tobin possesses a stubborn, serious, and direct personality, he is rather dense, being plagued with social obliviousness, and is poor at reading other people's emotions. Being the eldest of his family, Tobin maintains an air of brotherly warmth, playfulness, and kindness which inevitably transfers to his friends, those of whom he is extremely supportive of.

Tobin suffers greatly from an inferiority complex, as he is always competing with Alm and Gray to assert his superiority, the superiority of which he can never achieve. In his final base conversation, Tobin expresses his newfound understanding of his place in the world to serve a greater cause, and not to be in a position of relative ascendency. He further expresses that this understanding is not one he is content with, but rather, he is only accepting of it.

Heavily valuing familial ideals, Tobin joined the Deliverance to support his family in monetary means. As revealed in his level 40 conversation in Fire Emblem Heroes, Tobin constantly picks up souvenirs in his travels between battles for his many siblings back home.

In Chapter 1, talk to him in Ram Village.

Of the three starting villagers in Alm's route, Tobin joins as the second strongest and must only gain one level in order to class change at a nearby shrine. Statistically, he has the worst overall long term performance of the three, as his primary growths rates are of his skill and luck, with all his other growths rates being below average. However, he also has the highest base speed of the villagers, which allows him to start off slightly better than the two other in classes such as archer, mage, cavalier, and soldier, all of which have lower base speed stats than his personal base speed. As such he functions best in one of those options. As a mercenary, he does not have this advantage and has a worse performance in this class compared to Gray and Kliff, but the classline's high base stats mean he will still function well regardless if the player so chooses to use it.

Tobin returns in Echoes still with a heavy emphasis on skill, but has average growths in strength and defense and a slightly below average growth in speed. Tobin will likely end up an average unit due to his average strength and speed, though his high skill is particularly useful in Echoes due to the strong presence of terrain awarding large bonuses to enemy avoid. He also has the highest base speed of all the villagers, which gives him an early advantage over the other villagers in classes such as mage, cavalier, soldier, and archer. As a mage especially, his base 3 attack speed as a mage using fire tomes is enough to double attack early game brigands, which are fast enough to double attack the other two villagers due to their base 1 attack speed as mages. As a mercenary, however, his early speed advantage is not present due to the high base speed of the classline and his overall performance in the class is worse than that of Gray or Kliff, though due to classline's high base stats he can still function in it regardless.

Of note is Tobin's support bonuses, as his A rank support bonuses increase his allies' accuracy by 15%, including with magic. This bonus is significant enough that keeping Tobin around to support his friends may not be a bad idea even if his performance is less noteworthy than their own.

The Clueless One
Alm's childhood friend from Ram Village. Honest to a fault, and suffers for it. Appears in Fire Emblem Echoes: Shadows of Valentia.

Tobin is the sole Tempest Trials unit of the Ram Villagers which means that he is the easiest to acquire. He is blessed with a high BST for an infantry unit which provides him with nice spread out stats. Unfortunately, this serves as a hindrance as he is too balanced. His bulk does allow him to take hits from both sides of the damage spectrum, but neither make him a complete wall. His offense is average at best, with average Atk and Spd that is low enough for a wide variety of enemies to take his hits.

Tobin has an Armorslayer which deals effective damage against armor units and with his decent bulk, he can be a hard check for Green Armor slayers including Hector and Surtr, especially if he upgrades it to Armorsmasher and refines it to remove any visible buffs they receive before combat. Later, the Jubilant Blade became his new default weapon and it is merely a stronger Armorslayer. When upgraded, he now gains +4 to his core stats during combat so long as his base HP stat is higher than his opponent's. The upgrade also gives him 3 additional HP, thus as long as his opponent has at least 48 HP while he is unmerged or without factoring in other skills, Tobin gains a modest boost to his performance, but not an overly potent one. The effect also is not particularly useful against some Armored units as he does not have enough HP without merges and skills to use this effects over a decent number of unmerged Armored units.

He has Pivot for self-positioning, but with his 2 movement base, he is barely affected by using this unless using a well positioned ally to give him a pseudo-4 movement range. Attack +3 is a flat Atk boost that brings his neutral Armorslayer Atk to 46, which is an average for the stat to be, but the small boost can be replaced with better options. Seal Speed employs a -7 Spd reduction on an enemy after he combats them, which is more to set up enemies for the player’s turn so faster allies can use the Spd decrease to push their own ability to double.

Tobin fares poorly against blue units in general from bulky blue ones such as Ephraim, Nowi, and Fallen Hardin to blue mages like Linde, Lute, and Delthea. While has magical bulk, most of it is from his HP, not Res. This results in him taking significant damage from some of the most powerful Mages. He can resist some Panic units, but will likely be affected by most Ploy users as well

As mentioned above, Tobin can be built flexibly, but will not particularly excel. Most will take Reposition as the go to Support Skill for its positioning manipulation effect and Bonfire for his Special as his damage does gain a hefty increase with his good Def. Defensively, Tobin can be built primarily as a physical tank with a Slaying Edge to speed up his cooldowns and Steady Breath to further increase his physical bulk and further speed his cooldown. On a budget, Steady Stance at least gives him a good Def boost without the special acceleration. Quick Riposte solves his speed problem and guarantees a follow up or he can use Guard to slow down enemy cooldowns as well. Attack Smoke reduces enemy Atk when in range of him, increasing his physical tanking ability.

If sticking to his Armor slaying origins with his Jubilant Blade,Fury is a better version of his Attack +3 as it increases his four main stats by three, though the small recoil afterwards is easily covered. Swordbreaker allows him to take out several key sword armor units as well such as Zelgius, Zephiel, and Black Knight. Attack Smoke is still an excellent option though on a budget, other supportive Skill Cs can be employed.

(if Gray is alive)
As one of the most scrupulous knights in the One Kingdom's Brotherhood, Tobin spent his life serving his friend King Alm. The king, in turn, placed a great deal of trust in Tobin, eventually granting him both a title and his own castle.

(If Gray is dead)
Unable to move past Gray's death, Tobin abruptly vanished before reappearing just as suddenly several years later. At King Alm's suggestion, he joined the One Kingdom's Brotherhood of Knights. The talkative, playful Tobin of old, however, was gone forever.

Tobin is illustrated in the trading card game Fire Emblem Cipher with the following cards: 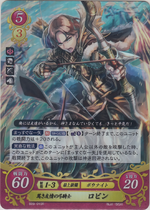 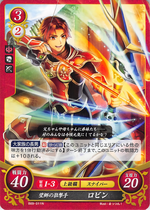 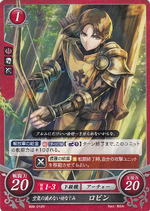 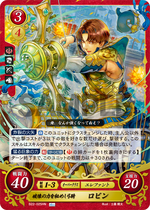