Bishop
[view]
“It is all the will of the goddess. Resign yourself to your fate... Accept it.”
—Tomenami to Schaeffer when Ike's army enters the temple

Tomenami is a bishop of little note in Fire Emblem: Path of Radiance. He is in charge of Palmeni Temple, which is taken over by a group of pro-Daein mercenaries following the capture of the Daein capital. These mercenaries force the priests to fight on their side.

At the beginning of the level, Father Tomenami gives Ike and his team a short tour, assuring them that nothing is wrong. Ike is not fooled and after a short time, the enemy mercenaries are discovered and a fight ensues.

If he survives the battle, he appears in a short scene, exchanging dialog with Ike, thanking him for saving his church. If he is killed, an unspecified priest takes his place.

In the level, Ike tells his group not to harm any of the priests. Though you will still pass the level, even if you kill every priest on screen, you receive bonus experience, depending on how many of the clergy you do or do not kill (the less you kill, the more bonus experience you get). If you successfully kill none, you will be given an Ashera Staff by Tomenami (the only way to get this staff).

In the battle, Father Tomenami and the two bishops near the boss Schaeffer can attack. This will also invoke retaliation against him. This makes him perhaps the greatest obstacle in clearing the level without killing any of the clergy. 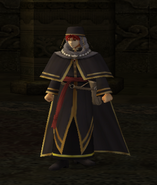