Chapter 16: The Atonement (Path of Radiance)

[view]
“I'm Tormod. I may not look like it but I'm pretty much the most dangerous mage around!”
—Tormod

Tormod is a playable character from Fire Emblem: Path of Radiance and Fire Emblem: Radiant Dawn. He is the leader of the Laguz Emancipation Army, befriending Sothe and being taken under Calill's tutelage during The Mad King's War.

Tormod is first seen in Chapter 15 with Muarim, fighting to free all laguz from slavery. When he first sets eyes on Ike's forces, he jumps to the conclusion that they are acting on Begnions orders to wipe out his family. Without giving Ike the opportunity to explain himself, Tormod proceeds to command his Laguz mates to engage his forces in battle.

When Muarim is defeated, Tormod jumps in to defend him. At this point, the pair's hardships are revealed, with the most prevalent being that of Begnion portraying them as bandits in a bid to wipe them out.

Tormod later meets the Apostle Sanaki, where he learns that her rationale for tracing out his band of Laguz allies is to unearth concrete evidence that Begnion's senators have been committing the crime of enslaving Laguz.

Returning with Muarim and Vika, Tormod assists Micaiah and Sothe in fighting Begnion in Chapter 1-7. When Muarim is driven insane as a result of Izuka's experiments to turn him into a Feral One, the enraged Tormod decides to leave the army after Muarim's condition has been restored by Rafiel's song.

Tormod later returns in Part 4 with Muarim and Vika, countering and battling Oliver's forces alongside Ike's army. Through a conversation that he shares with Ike, it is observed that he is just as sensitive over his height, noting the extent in which Ike has grown as compared to himself.

After the events of Radiant Dawn, Tormod will assume the role of a Laguz relations officer in Begnion, helping former slaves escape poverty.

Despite being rather arrogant, Tormod is very headstrong and enthusiastic, intent on freeing all laguz from slavery. As a result of being raised by Muarim after being orphaned as an infant, he grew to develop a deep respect for the laguz race. Tormod is also observed to be rather sensitive about his height, a trait that is picked on by both Sothe and Ike.

* Depends on player's choice.
** If his weapon rank is still at E before promotion.

Tormod's starting level, when combined with his relatively late joining time, may prove to be detrimental to his usability. Fortunately, his starting stats are not particularly mediocre, giving him the potential to do well as a unit if given the proper training. Tormod's Resistance will also be able to reach a high enough value upon Promotion, allowing him to negate most magical-based attacks. His Strength and Skill stats are just as competent and his Defense growth rate is fairly high, resulting in him being able to become an asset to the player's army over time. Tormod's main point of intrigue is his Celerity skill, which gives him 7 Movement, making him significantly more mobile than the generally sluggish mages common to Path of Radiance. This allows him to more easily keep up with cavalry and foot units, or escape hostile situations.

* Only if Thunder/Wind mastery rank is at E.

Tormod is a force to be reckoned with when he joins in Part 1. During this time, he is capable of performing Double Attacks on most foes, dealing lethal damage in the process. Tormod also has the Defense and HP to sustain several blows, and is competent in dodging enemy attacks. On the whole, his stats and growths are solid, but his low availability often causes players to leave him on the sidelines.

As Tormod is considered to be over-leveled in Part 1, it is thus a mistake to allow him to gain very much Experience during this time.

Upon departure in Part 1, Tormod will be virtually non-existent until Chapter 4-4. Returning at exactly the same level with exactly the same stats, he is rather difficult to train. However, it is still possible to train him into an Arch Sage, provided that the player is willing to take the pains to grind levels for him before the Endgame chapters begin.

Even if use of Tormod is desired, Tormod's growth rates are more suited to that of a Warrior than that of a Fire Sage, as his Strength growth far exceeds his Magic growth. This is turn however, makes him a great staff bot upon promotion, as he can just use Mend to fully heal allies, as his magic is still sufficient, and can actually do damage with staff counters on frailer enemies like Swordmasters, or Spirits, should Provoke be assigned to him in endgame, and he caps his high growth stats rather quickly, making him possess great Bonus Experience potential.

All in all, Tormod is a great asset in part one, and despite his extreme fall in part four, he still can redeem himself, should you invest in him before 4-4 starts, and even if you do not invest in him, his contributions in part one still make him more of an asset than quite a few units.

"...Well, we're going home. All of our desert friends are waiting for us. And wow, do we have some stories to share with them!"

As Begnion's laguz advisor, Tormod labored to help former slaves out of poverty. He was busy, but very happy.

Sothe: Hey, Tormod!
Tormod: You! What in blazes did you do?! You scurvy traitor!
Sothe: What are you talking about?
Tormod: You grew! Too tall!
Sothe: And to think, I expected you to make sense. I have more important things to tend to.
Tormod: Hey, it's important to me!
Sothe: What I'd really like to hear about is that issue I asked you to look into... How did it go?
Tormod: I have news to report. But! there's no time to chat in the thick of a fight. I'll tell you later!
Sothe: Hey! Drat!

Tormod is illustrated in the trading card game Fire Emblem Cipher with the following cards: 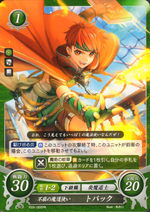 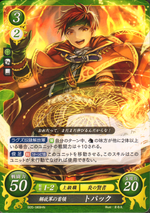 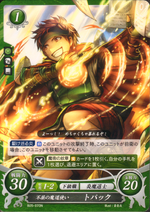 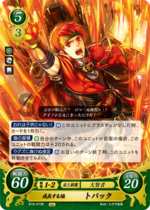 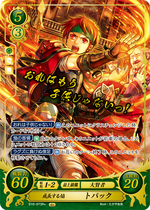 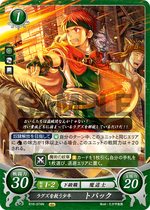 The name Tormod is Norwegian, originating from the Norse words, meaning "Thor's mind."