Tornado (トルネード Torunēdo) is an high-level Wind tome recurring in the Fire Emblem series. Capable of inflicting bonus damage upon flying units, this tome is inherently weaker than both the Bolganone and Thoron tomes, though only weaker than Bolganone in Fire Emblem: Radiant Dawn. This tome is, however, the lightest of the three, effectively minimising the Attack Speed penalties that its wielder may suffer.

The Tornado tome, as it appears in the second series of the TCG.

Map animation of Arthur casting Tornado on Ovis in Genealogy of the Holy War. 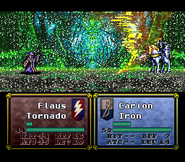 Kayachey casting Tornado on Mist in Path of Radiance.
Add a photo to this gallery
[view]Anima
Fire
Thunder
Wind
Others
Retrieved from "https://fireemblem.fandom.com/wiki/Tornado?oldid=419047"
Community content is available under CC-BY-SA unless otherwise noted.