Just an Extra
Cavalier (As a Mirage Master)

Yūki Ono
[view]
“My fighting spirit is already at the max!”

Touma is an eighteen-year-old (seventeen in the Japanese version) high school student and a classmate of Itsuki Aoi and Tsubasa Oribe. He's an affiliate of Fortuna Entertainment and a Mirage Master partnered with Cain. His birthday is June 22.

Touma's side story revolves around him and a little boy whom he notices is depressed during one of his shows. He lies to the boy, telling him to watch for him to be a hero. During his second story, the boy realizes that he lied and reveals that he has been depressed due to his parents recently divorced. Touma apologizes for lying to him, but makes a promise that he will become a real hero.

His first means of doing so has him and Itsuki hitting on girls in Harajuku to practice charming the female audience of his shows. After watching Itsuki lead, Touma picks up a few skills and is successfully able to not only win over the children, but the women in attendance. Backstage, Touma reveals to Itsuki that his parents ran off due to owing a serious debt, leaving him to be raised by his grandfather. He realized that the little boy reminded him of his younger self, idolizing the heroes at the shows who always seemed to stand up to any adversary, regardless of the circumstances. Itsuki promises to help Touma achieve his goals of becoming a true hero.

Touma receives an audition for the leading role in an upcoming Masqueraider, Ouga to celebrate the franchise's 35th anniversary. The good news is immediately broken when the little boy he met earlier has gone missing in Shibuya. Cain reveals that the boy, Riku Suzumoto has a high amount of performa and was likely taken by Mirages near 106's Idolasphere. Touma leaves to rescue Riku. Just as they reach the top of the tower, Maiko informs Touma that the audition is happening as they speak. Though Itsuki allows Touma to leave to make his audition, he declines, wanting to save Riku himself due to his promise. They find Riku possessed by the Mirage Abel, whom Cain has history with. Touma and Cain are able to defeat Abel, freeing Riku. Touma is able to understand that a hero is someone who protects others, causing his performa evolve. Cain gives Touma a ride just in time to his audition. With the passion of his growth and the support of Cain and Itsuki, Touma wins the audition, earning the role of Masqueraider Ouga.

After his debut episode airs, Riku visits Fortuna Entertainment. Revealed to have bonded with Abel, he asks Touma to teach him how to become a hero like him. Touched, Touma promises to help Riku become like him. Riku departs, leaving Touma to thank Itsuki for his support. Having achieved his dream, Touma vows to continue to fight against Mirages and inspire others as Ouga, the Awakened Hero he has become on TV.

Touma is a hotblooded character and works as a Henshin hero as part of a stage show. He appears to be a slacker, but actually goes out and does things first. He is steadfastly loyal to his fellow Mirage Masters and works hard in order to achieve his dreams.

Touma's main goal is to land a role in the "Masqueraider" series as the show inspires hope through adversity, a reminder of his rough childhood. He develops a soft spot for one boy, Riku Suzumoto, whom he makes a promise to become a hero. By the end of his Side Story, he achieves his dream and becomes an inspiration to viewers of the show and even vows to support Riku's desire to become a hero like Touma when he grows up.

According to his profile, he is a capable singer as well, having been taught by Kiria, though he learned it as a means to expand his repertoire.

After Enter-Kingdom, Touma continued his work playing extras in live shows, slowly increasing his reputation. Eventually, he caught the attention of a famed producer who cast him as the star of one such show. Touma works hard, hoping to one day find his chance to become the hero he's always dreamed of.

Touma Akagi - In the Kaiju Suit

Touma continued his training even after Enter-Kingdom. Taking advantage of his physical abilities, Touma becomes a stunt double, and a crucial part of Japanese live-action cinema. Though the audience may never see the face behind the mask, Touma continues to fight as a hero.

With his charming performance, Touma grasped the hearts of many female fans, and made a name as one of he most attractive male actors in the business. Though he found unexpected success in Japanese romantic cinema, he still dreams of heroism, and trains for his chance at the next Masqueraider audition...

After appearing as "Masqueraider Ouga", Touma found great success as an action star. He eventually wrote, directed, and starred in his own hero movie, which was acclaimed for its action scenes... particularly those between Touma and his costar, the up-and-coming Riku Suzumoto.

Touma Akagi is illustrated in the trading card game Fire Emblem Cipher with the following cards: 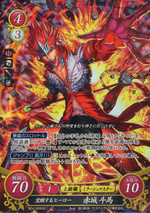 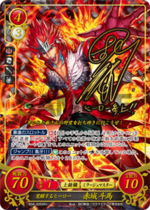 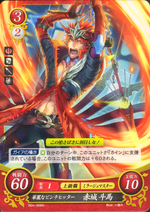 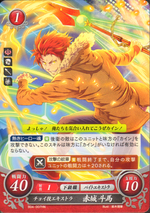 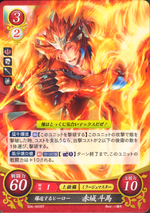 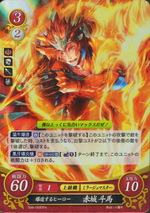 The characters in Touma's given name refer to horses, while his surname means "red castle".