“My fighting spirit is already at the max!”

Toma is a seventeen year old high school student and a classmate of Itsuki Aoi and Tsubasa Oribe. He's an affiliate of Fortuna Entertainment and a Mirage Master partnered with Cain. His birthday is June 22nd, has a O blood type, stands at 183cm (6 feet) and weighs at 75kgs (165 ibs).

Toma is a hotblooded character and works as a Henshin hero as part of a stage show. He appears to be a slacker, but actually goes out and does things first. His dream is to take the lead role in the tokusatsu show "Masquerader".

The characters in Toma's given name refer to horses, while his surname means "red castle". 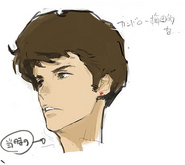 DLC Costume of Toma as Walter from Shin Megami Tensei IV.
Add a photo to this gallery