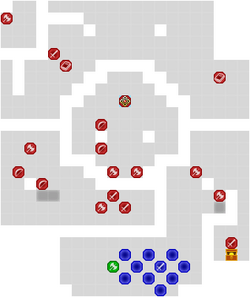 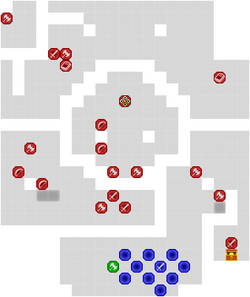 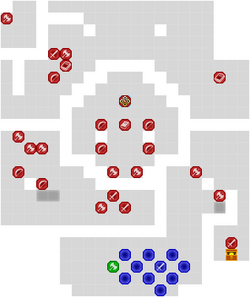 Chapter script
[view]
“I would like for you to take your students into Kingdom territory to eliminate some thieves.”
“They stole a Hero's Relic from House Gautier of the Holy Kingdom of Faerghus—The Lance of Ruin. The leader's name is Miklan. He is apparently a disowned son of House Gautier. ”
—Lady Rhea and Seteth

After the meeting Byleth meets with Hanneman who has discovered the identity of Byleth's crest. It is the Crest of Flames, a Crest that was wielded only by Nemesis over a thousand years ago.

When reporting to Rhea, she calls it divine punishment from the goddess. In the library, Byleth and their house leader run into Tomas while talking about how Miklan couldn't use the lance because he lacked a Crest. Tomas then talks about how using the Heroes' Relics transformed Nemesis and the other humans into black beasts.

The easiest approach is to have your magic unit with high enough Magic use Warp to ascend to the top floor(however your options are limited, as you can only warp one unit or two for Bishop/Gremory). Byleth with enough Strength to defeat Miklan and proceed to the second phase of the battle, however due to all enemies undefeated will stay.

There are two Treasures on this map. The first with being an Armorslayer in the chest guarded by a Thief. With enough strength/magic(if using Magic Bow with the class being either Archer, Sniper, or a Bow Knight, it should easy to take out and loot the chest. As for the Accuracy Ring dropped by the a Fortress Knight, you can use the Armorslayer you got or a magic unit to take it out, however upon entering the range, it will guaranteed use a Gambit on you, meaning Shove,Draw Back, or Smite can work here(Swap and Reposition can be used but afterwards must use Draw Back in order to kill on one blow). Alternatively, a unit with high Gambit evasiveness, notably Byleth and the three Lords depending on chosen house, can be used to "tank" the Gambit uses.

If Warp is not available for use, then your army will be navigating the spiral map in order to reach Miklan. His forces are spread throughout the hallway, mainly consisting of Thiefs, Fighters, Archers, and Armored Knights, with the one lone Fortress Knight with the Accuracy Ring in the upper left corner. There will also be a Priest with Physic in the middle room, more or less capable of healing any enemy unit who is damaged, though they can only heal once per enemy turn so they are more annoying than a threat. The middle room also has a few Archers positioned to snipe at your units if they are too close to the middle wall, so care should be taken to make sure they cannot reach. (especially on Maddening where they have Poison Strike)

If you have any Archers or the Chalice of Beginnings, those units can counterattack and lure the archers closer to the wall for other units to defeat them. Keep in mind that you run the risk of aggrivating every single enemy on the map, including Miklan, by doing this, causing a long line of enemies to begin marching toward your army. Depending on how your units have grown by this point, this can be taken advantage of to safely take out the enemy, including Miklan, without ever having to trigger the second set of ambushes.

Miklan, despite having a Relic, is not a threat whatsoever. As an Armored Knight he cannot move very far, he cannot counterattack ranged attacks, and he has no skills outside of Lance Prowess Lv 3. His Res is also extremely low even on Maddening, meaning the armies magic users can almost assuredly take him out in one combat if they are fast enough. Most importantly, however, is the harsh penalty Miklan suffers by trying to use the Lance of Ruin without a crest: a large post-combat HP penalty. With this in mind, one could poke at him with Bows and leave his HP so low that any attack can finish him off and end the first phase of the map.

The Second Phase of battle consist of having a Monster fighting your units, the only priority is the undefeated enemy units who will obnoxiously slow your combat against it. Any enemy ambushes that were not triggered before Miklan was defeated in the first phase will also trigger at this point. Your best choice is to remove the barrier as soon as possible and inflict armor break, meaning he cannot use Magic Bind until it recovers. After a clash, the battle is over and you proceed to the next chapter.

There is no gameplay or story consequence to Gilbert falling in battle. He is likely to die early on Maddening, so thankfully you can safely leave him behind to put some distance between your army and the coming ambushes.