View source
“My father...my stepmother... Four years ago, they lost their lives to those flames. I'll never forget... I still remember their faces. Their screams. The tortured last moments of every person who died that day..”
—Dimitri recalling the Tragedy in Chapter 8 of Three Houses

The Tragedy of Duscur occurred in the Holy Kingdom of Faerghus in Imperial Year 1176.

The Tragedy of Duscur is used to refer to two related events: a massacre, and the pogrom that followed against its alleged perpetrators. The initial incident was the assassination of a number of Kingdom royals and nobles during a diplomatic mission to Duscur, among them King Lambert, Queen Consort Patricia, and Glenn, the firstborn of Duke Rodrigue. Crown Prince Dimitri bore witness to the attack, and was the sole survivor. The people of Duscur, residents of a barren peninsula on the northern coast of Faerghus, were blamed for aristocrats' deaths, along with several Kingdom nobles such as Christophe who were said to have provided assistance to the killers.

Despite Dimitri's attempts to clear the Duscur people of wrongdoing, the masses refused to believe him. In the aftermath, pogroms of the Duscur people began on an unprecedented scale. The lands of Duscur were also annexed by the Kingdom and placed under the dominion of House Kleiman.

Very few people from Duscur survived the pogroms, one of them being Dedue, who was saved by Dimitri. Ingrid, who had been betrothed to Glenn from birth, continued to resent the Duscur people for their alleged role in her fiance's murder. Lord Lonato, the father of Christophe, was devastated by his execution at the hands of the Knights of Seiros and began plotting a rebellion against the Church of Seiros.

Considering the fact that prejudices toward Duscur already existed before the incident, very few people in the Kingdom know or even questioned if the people of Duscur were innocent, regardless of how many inconsistencies the events surrounding it had. Sylvain is one of the few that acknowledge this, since he points out that the people of Faerghus and Duscur were on good terms, and expresses skepticism that the Duscur people killed the king unless they had outside help who wanted to make them scapegoats, as seasonal militia would have absolutely no chance in fighting off well-trained regulars.

The truth behind the Tragedy of Duscur is slowly unraveled between the Azure Moon (Dimitri's) and Crimson Flower (Edelgard's) routes. Rodrigue, investigating his elder son's death, discovered that Patricia's carriage never suffered signs of attack—she simply vanished during the Tragedy and has never been heard from since, even after her daughter Edelgard's ascension to the throne. This implicated her as a conspirator in the Tragedy, which is confirmed by Cornelia in her dying words. Cornelia claims that Patricia wished to see her daughter so much, she was willing to do anything for it, even if it meant plotting the assassination of the king. This is further cemented when one of Viscount Kleiman's men confesses that they had been given specific orders ahead of time to avoid Patricia's carriage, and that the lord was approached with an offer to take part in the incident, which he agreed to since he had long felt discontent with Lambert's policies.

However, Dimitri's conversation with Hapi reveals that Cornelia may have goaded Patricia into becoming a willing conspirator in the Tragedy, as she persistently inserted herself between her and Lambert in order to avoid them ever being alone together, which came to a head shortly after Volkhard and Edelgard's departure from Fhirdiad, when Cornelia apparently revealed to Patricia that her daughter had been in the city, and manipulated her into thinking that Lambert had concealed that fact from her, turning Patricia against her husband.

The Flame Emperor tells Thales and Kronya that Those Who Slither in the Dark would never gain salvation for instigating the Tragedy of Duscur and carrying out the Crest experiments on Edelgard and her siblings. Thales responds that these events were instigated for the Flame Emperor's benefit. Edelgard, in her route, later reveals that her uncle Volkhard, Patricia's brother, was the mastermind behind the Tragedy of Duscur. Considering Volkhard and Thales are one and the same, the Tragedy of Duscur was used to destabilize Faerghus and make it easier for Cornelia to gain a foothold in the Kingdom's affairs. 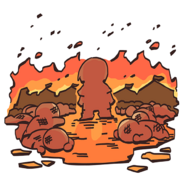 The Tragedy of Duscar, as depicted in the Fire Emblem Heroes Guide.
"End of spoilers. It's a pleasure doing business with you!"