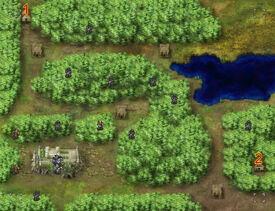 Chapter script
[view]
“Count Merlon joined forces with a foreign army to lead a rebellion against the royal family. I must follow my master's orders and do justice to him...”
—Roger, in conversation with Mel

A pretty tricky map because of Roger and Mel. Bring Sasha and Julia to recruit Raquel and Vega respectively, and mounted units to save the northwest village before it gets destroyed.

Mahter joins in the first turn. She is an excellent unit because of her good stats and ability to fly. Keep her away from archers or dismount when in range of them, because Bows are effective against Pegasus Knights. Move your mounted units forward to save the village, and move Julia south from the first fort to recruit Vega.

Once Sasha reaches the northwest house, she can enter it and recruit Raquel. If Ruka is in your team, let him enter the house before Sasha to receive a Hand Bow. However, contrary to some rumors regarding this game, this is not required to activate the event that will let Raquel kill humans later in Map 26A. For that to occur, the player need only have Raquel deployed in Map 26A as well as Ruka in Runan's party (he doesn't actually need to be deployed) at the time.

Raquel is a rather special unit. She can't kill humans, but will instead leave them at 1 HP. She can kill the monsters that show up later in the game though. As a combat unit, she isn't too good because of said restriction, but she is useful for weakening stuff for other units. You can remove this restriction through an event between Ruka and Raquel in a much later map.

Stay out of Vega's range, and let Julia speak to him, try to keep out of the enemies' range. Vega will duel with Julia and she will be reduced to 1 HP, but Vega will join and give her a Healing Fruit. Vega can move up and recruit himself on enemy phase if he is within movement range of Julia. He will not attack player units before being recruited

Vega is pretty awesome, his personal sword, the Shramm Sword, halves damage received and has a high critical rate to boot. He has Heaven Saint, allowing him to absorb HP, meaning that he'd be hard to take down.

Roger and Mel will start charging on turn 5. However, keep in mind that he will not attack female units, and he will move in the direction of the closest male unit. So, this means you can lure him and run away with a high move unit such as Raffin, while Runan runs past everything and seizes the throne. This also means that you don't have to worry about him attacking Raquel or Sasha if you use Sasha to recruit her.

The Far-Healing staff is relatively easy to get with Mahter, as she has no trouble avoiding enemy ranges in this map. Doing this means you won't have to take extra time having a foot unit do a detour to get the staff.