View source
watch 48:08
'Fire Emblem: Path of Radiance' - Chapter 14
Do you like this video?
Play Sound 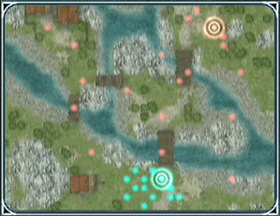 Chapter script
[view]
“The Begnion Empire, the largest nation on the continent, is a theocracy dedicated to the goddess Ashera. Reigning from the summit of the empire and guiding the world with the voice of the goddess, the apostle Sanaki rules Begnion. As Ashera's chosen vessel, the apostle is showered with love and respect from the entire nation. Seven imperial senators aid the apostle in the governance of her realm. This system of government has been the backbone of Begnion for many long centuries. After Ike and his company aid the apostle, her holy guard takes them to the imperial capital, Sienne. The upper class of Begnion society live lives of pampered comfort and luxury. Known as the Sainted, these elite power brokers reside in massive temple-like homes whose spires dominate the skyline. The Guiding Tower overlooks all from the heart of the city. Here, Ashera holds her vigil, watching over the world. Surrounding the tower is a series of temples, both large and small, placed in an orderly, systematic fashion. One temple, however, is conspicuously larger than the others. It is the grand temple Mainal, home to the apostle. Ike and his company, used to the freedoms of Crimea, find the differences in culture and custom to be very confusing.”
—Opening Narration

Training is Chapter 14 in the game Fire Emblem: Path of Radiance.