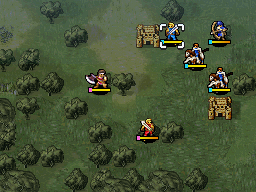 Training Begins is Prologue III of Fire Emblem: New Mystery of the Emblem.

In this chapter, Kris and the rest of the 7th Platoon fight against Caeda's troops and then against the princess herself.

Keep in mind that after completing the battle, Jagen will present you with a Yes or No question; your answer changing not only the boss of the next Chapter, but also a future recruitable character. The general consensus is that answering "No" leads to an easier fight in Prologue IV, but "Yes" leads to the recruitment of a more useful character.

The player should build a formation to protect Ryan and use the lower fortress to increase the survivability of one of the more fragile units.