Chapter 3: Lionheart Eldigan [fought in Chapter 9: For Whose Sake] (Genealogy of the Holy War)

Jason Marnocha
[view]
“My fondest wish is to return this land to what it was in the days of Dáinn and Njörun. ...Even if it damns me to the deepest pit of Hell.”
—Travant, in a conversation with Altena in Thracia 776

Travant is an enemy character from Fire Emblem: Genealogy of the Holy War. He is the king of Thracia, the father of Arion, and the adoptive father and distant relative of Altena. Being a full-blooded descendant of Crusader Dáinn, Travant is eligible to wield Gungnir. He orchestrated several major events in the story, being directly responsible for several atrocities that take place in Jugdral, including the Aed Massacre and the invasion of the Munster District following the Battle of River Thracia.

According to the designer's notes, Travant appears to be indifferent to his reputation as a villain, but he is actually an extremely passionate man who is willing to go to any lengths and tarnish his own reputation for his beloved Thracia. If he had not been born in Thracia, he would have been a true hero.

Travant first appears in Chapter 3 when he is aiding King Chagall, who hired a group of Thracian mercenaries. The Dragon Knight Papilio leads an assault on Sigurd's army, but after this failure, Travant abandons Chagall to his demise.

In Chapter 5, he leads a troop of Dragon Knights wielding Horseslayers into the Yied Desert in pursuit of Quan's Lance Ritter, who are headed north in the desert to join up with Sigurd's army. Making use of the fact that the horse riders' movements are severely impeded by the desert terrain, Travant succeeds in ambushing them, slaying the entire platoon of knights, as well as Quan and his wife, Ethlyn.

After the massacre, Travant picks up the infant Altena and the holy Gáe Bolg before returning to his country. He then raises Altena as his surrogate daughter, with his main intention being to recruit an invaluable user of Gáe Bolg into his ranks. It is, however, insinuated that he cares for her because of his guilt from killing her mother, Ethlyn. Additionally, he educated her to become to a ruler because he was aware of her importance to the future of the Thracian peninsula.

In the second generation, Travant has his trusted confidant Disler ransom Coirpre, the adopted son of General Hannibal, who was beginning to have doubts. He later reveals the truth of Altena's parentage to her when asked. Reflecting that he is the one whom Seliph's invading Liberation Army is after and that he has "grown tired" of warfare and politics, he passes the Kingdom of Thracia and the Heaven Lance Gungnir on to Arion, telling him that his only wish is to "see an end to the people's suffering". Knowing that he will likely be defeated, he enters his final battle with Seliph's army alongside a squad of Dragon Knights, and is slain in the process.

In Thracia 776, it is revealed that Manfroy and Veld manipulated Travant into carrying out the Aed Massacre.

Travant is portrayed as a ruthless and uncaring individual, which is likely a result of growing up in the harsh conditions of southern Thracia. Although he comes off as being despicable and cunning, he is, above all else, thoroughly committed to the future of Thracia, seeking to improve the quality of life of his people through the reunification of the peninsula. He is well aware of the nature of his methods, but is indifferent to being condemned by history if it meant improving Thracia's conditions in the future. Because of this, his views are popular among the Thracian army, who saw him as their one true emancipator.

*Dropped when defeated (if First Generation equivalent was not passed down)

Travant is not fought by the player in Chapter 5, as his main role in the chapter is to oversee the deaths of Quan and Ethlyn before leaving Magorn to do battle with the player's army. As he possesses the holy Gungnir lance as well as a Recover Ring, he is unable to be defeated by any members of Leonster's Lance Ritter, although the player can manipulate it into occurring through specific methods that do not change the story.

In Chapter 9, the player will actually confront him as an enemy. As he passes the Gungnir to Arion before the battle, he should fall fairly quickly if engaged with Ced with Forseti or Febail with Yewfelle. The player should keep a wary eye on the powerful group of Dragon Knights accompanying Travant under his 4-star leadership alongside Hannibal's group taking charge at the same time. Since Travant is intent on attacking the player's army, he will charge your forces at full speed regardless of the situation, so be prepared to take him down as soon as possible.

King of Thracia
King of Thracia, and descendant of the crusader Dáinn. Eying the fertile land to his north, he hatches a plan to unite the entire peninsula. Appears in Fire Emblem: Genealogy of the Holy War.

“Heh heh heh... Welcome, rebel scum. I am Travant. Remember this well: a final gift from the depths of the inferno!”
—Travant, in Chapter 9 of Genealogy of the Holy War.

Vs Leif
Travant: Heh heh heh... So! You're Quan's troublesome little son, are you? What a fool Bloom was... How could he have failed to kill a runt like you?
Leif: We meet at last,Travant... I... I've awaited this day for so long. This is what kept me alive all this time... I've lived for this alone: to choke the life from you with my bare hands!
Travant: Heh... As foolish as your father... And unlike him, you can't even wield Gáe Bolg! You don't stand a chance! Now, hold still! It's time you learned the last agonies your father felt at my hands!

Vs Finn
Travant: Finn, isn't it? It's been a while. So you're still alive...how stubborn of you.
Finn: King Travant, today I will take revenge for what you did to my lord!
Travant: Hahaha, don't make me laugh. What do you think you can do to me!? You're the one who's gonna die!!

Travant is illustrated in the trading card game with the following cards: 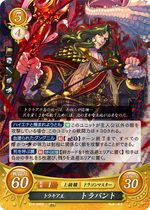 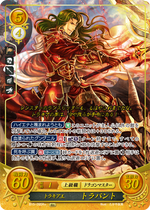 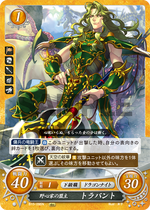 Trabant is a German word that means 'companion', which reflects the fact that despite being king, he is close to the ordinary people of Thracia.