Lexi Klein
[view]
Triandra is a character from Book IV of Fire Emblem Heroes. She is a Dökkálfar from Dökkálfheimr.

Triandra, as said in her profile, is a cold and distant young dökkálfar. She has devoted herself to the service of Freyja after she rescued her in the past.

Before meeting Freyja, Triandra and her younger sister were badly mistreated by their father who barely fed them, made them dress in rags and did not allow them inside their house even in winter. Triandra did her best to protect her sister, and at some point she murdered their evil father. She was found and made into a dökkálfar by Freyja some time later.

In Chapter 12 of Book IV, it's revealed that Triandra's sister is actually Peony. She laments how she wanted to protect her sister from their father before engaging the Order of Heroes one last time. The Order manages to deal Triandra a fatal blow, and she recalls the time she and Peony spent together before she dies.

Contrary to her ljósálfr counterpart, Triandra is a pessimistic, deadpan dökkálfr who brings nightmares.

She is exceedingly loyal to Freyja, as even when she remembers her mortal life, she chooses to give her all for her sake.

Nightmare
A dökkálfar from Dökkálfheimr, the realm of nightmares. Delivers terrible dreams to mortals. Cold and distant, she lives on without hope.

Triandra is the fourth and final refreshing unit to come from the Book IV original characters and much like the others, she immediately has powerful applications for teams. She is a Green Tome Flying Dark Mythic hero mostly suited for scoring on Aether Raids teams, but she can be used in other modes if needed where scoring is not affected by her Mythic hero status. Statwise, Triandra is offensively strong, sitting on neutral 37 Atk and 38 Spd. While she may not have the highest damage, both stats are strong enough to give her flexiblity in being a supportive unit or a second string offensive unit. In exchange, she has low overall bulk at 16 Def and 22 Res, making her extremely fragile. While she may be another refresher unit, like the other Book IV dancers, her unique refreshing skill gives her a special niche.
Flower of Sorrow grants her an innate +3 Atk, bringing her total neutral Atk to 54. If she enters combat, she inflicts Def/Res-4 on all foes within the cardinal directions of her, not only setting up her foe so she can inflict more damage, but also weakening her foes so her allies can dispatch any that she cannot do herself.
Her unique dance, Frightful Dream, refreshes an ally that she uses on. When used it also inflicts the【Guard】status on foes within the four cardinal directions, slowing the charge of their specials while inflicting an additional -3 to their four core stats.
Attack Speed Push grants her Atk/Spd+7 at the start of combat so long as her HP is at least 25%. After combat, she takes -7 non-lethal damage as recoil however. Aerobatics allows her to move to any adjacent tile next to an ally infantry, cavalry, or armor unit within two spaces. Speed Resistance Rein inflicts -4 Spd/Res to foes within two spaces of her during combat.

Triandra suffers from her low defenses which makes her especially vulnerable on her enemy's turn where they can get the first strike on her. Bow units are especially overkill as her innate weakness to them due to being a flier means that any who gets the first strike on her is instantly going to kill her. Red units with strong magical bulk like Winter Tharja, Plumeria, and Flora can easily soak her damage and counterattack through color advantage.

Triandra is only missing a Special skill, of which Glimmer is a decent consideration to take any visible buffs she may receive and turn them into further power.

Triandra is illustrated in the trading card game Fire Emblem Cipher with the following cards: 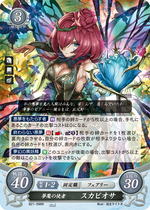 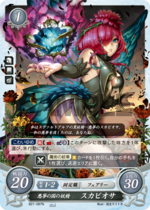 Triandra is a common species suffix name for various plants including Themeda triandra and Areca triandra. Scabiosa is a genus of flowering plant, commonly known as "pincushion flowers".